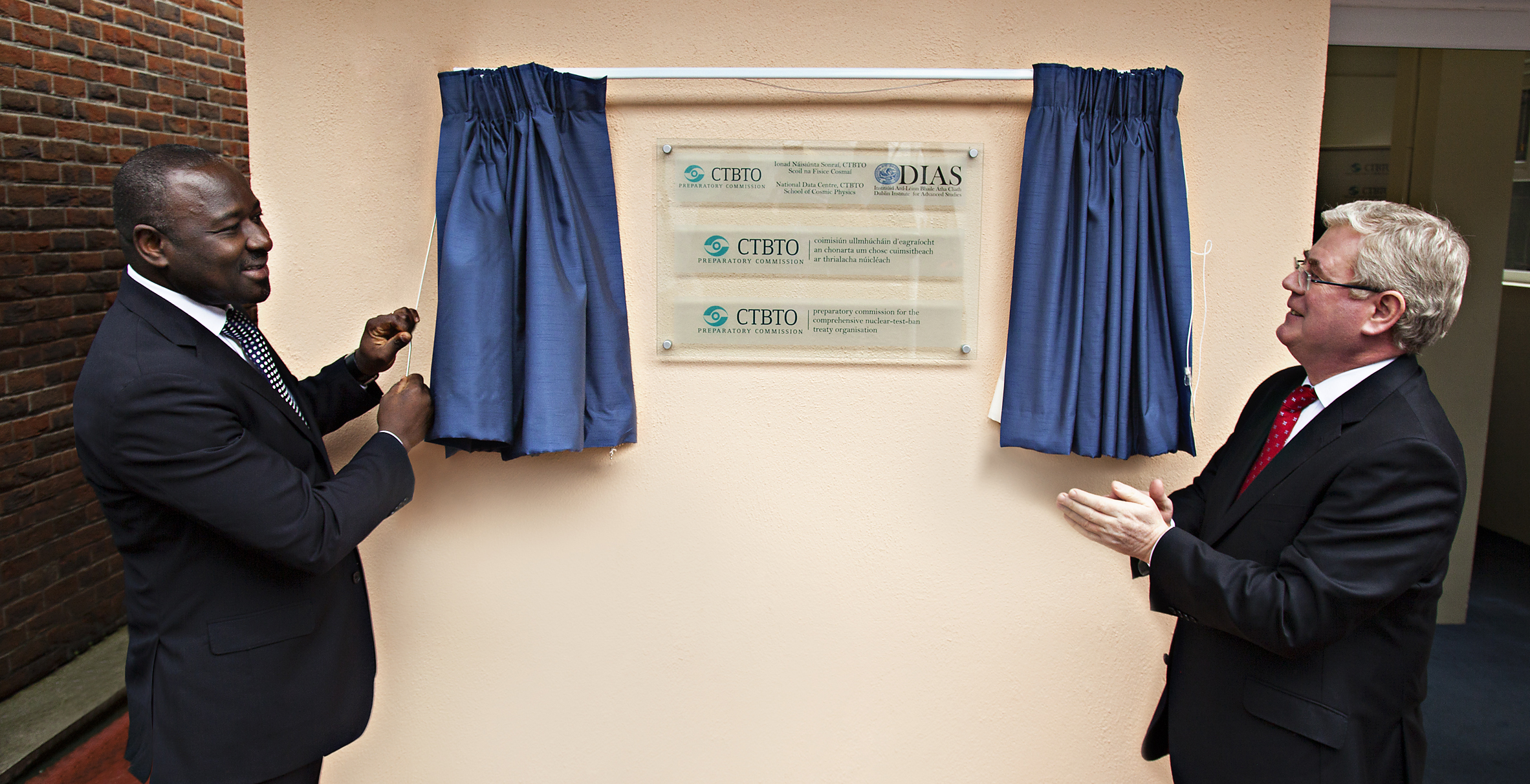 The National Data Centre, which is located in the School of Cosmic Physics, 5 Merrion Square, is part of the CTBT’s unique and comprehensive verification regime to make sure that no nuclear explosion goes undetected.

Speaking at the opening, the Tánaiste said that “Ireland has always strongly supported the Comprehensive Nuclear Test Ban Treaty. We see it as an essential element in the global nuclear non-proliferation regime built around the Nuclear Non-Proliferation Treaty. By prohibiting all nuclear weapons test explosions and all other nuclear explosions, the Comprehensive Test Ban Treaty will impede the development and qualitative improvement of nuclear weapons. It is therefore essential to achieve an end to nuclear testing.”

The opening of the NDC in DIAS is significant because of the international high level research and potential scientific exchanges opportunities it presents for Irish research personnel in the areas of seismology, radionuclides, infrasound and hyrdoacoustic monitoring. The NDC will be a gateway for all research facilities in Ireland who wish to access the vast database of global monitoring data available at the International Monitoring Centre in Vienna at the CTBTO.

Global concerns about earthquake hazards, environmental change, and nuclear testing present many opportunities for international partnerships and interactions on technology transfer, capacity-building, confidence-building and integrative hazard assessment that are all complemented by basic research, in which DIAS wishes to participate.  The advanced state-of-the-art of seismology in the developed world can be leveraged to enfranchise and encourage and support progress in developing nations that are struggling to deal with  challenging hazard issues and limited resources.

The NDC will also play a key part in the promotion and capacity building of the CTBTO ideal in Ireland and internationally. The very successful DIAS Outreach programme to primary and secondary schools, universities and geo-parks, already in place in the School of Cosmic Physics, and encouraging 3rd level students to participate in the extensive e-learning programmes available from CTBTO via the Internet, will further facilitate this aim.

Noting Ireland’s long tradition of scientific excellence, the Tánaiste stated “Irish scientific research lies at the foundation of modern seismology. Robert Mallet, a Dublin scientist working in the mid-Nineteenth century, tested how energy generated by explosions would pass through sand and rock. Mallet is today regarded as the father of seismology. Over 150 years later, Ireland remains a centre of scientific excellence. In reflection of our standing on scientific research, I am delighted that, in July, the most influential figures from the world of science, society and policy will assemble in Dublin for the 5- day Euroscience Open Forum: Europe’s largest science conference. This global gathering of Nobel Laureates, leading researchers, policy makers, business leaders and International media will showcase to the world how current Irish research is leading the way in many respects.”