Joanne Adam of the Geophysics Section (School of Cosmic Physics) has won the Student Author Award of the Geophysical Journal International. The award has been established to recognise and acknowledge the ‘best papers’ submitted to the journal from young scientists in the field. 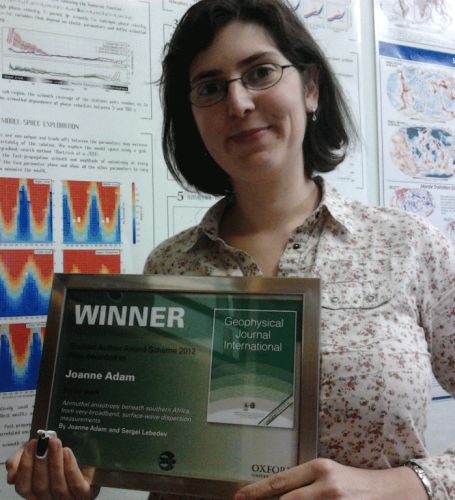 Joanne is one of the three 2012 winners, each receiving a cash prize and a certificate. The awards are being announced on the journal website and at the American Geophysical Union Fall Meeting in December 2012 and the European Geophysical Union General Assembly in 2013. Joanne’s paper (“Azimuthal anisotropy beneath southern Africa, from very-broadband, surface-wave dispersion measurements,” by J. Adam and S. Lebedev) reveals the layering of seismic anisotropy beneath southern Africa. Reconciling long-debated previous observations, the results present important new evidence on the mechanisms of the assembly of ancient continents billions of years ago. Joanne’s winning paper has been granted Free Access on the journal website.