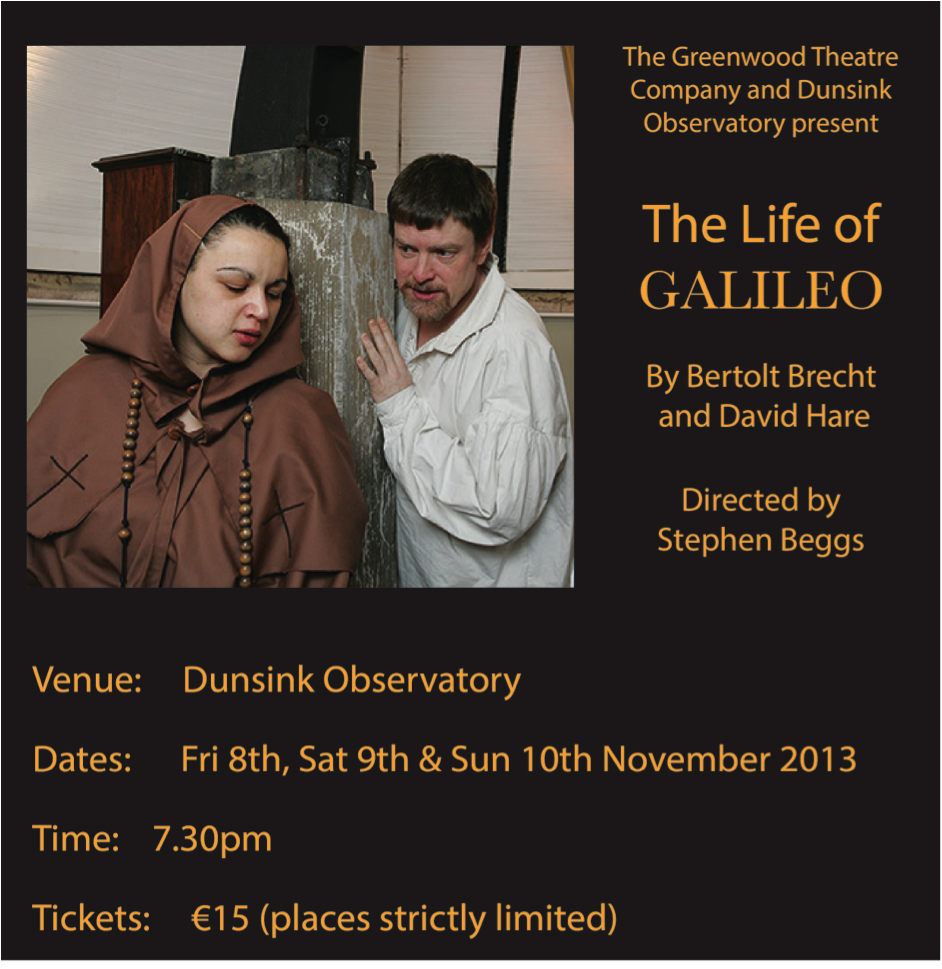 The Greenwood Theatre Company, in association with Dunsink Observatory, Dublin Institute for Advanced Studies, proudly present “The Life of Galileo” by Bertolt Brecht in a new version by David Hare.

The Greenwood Theatre Company have been working in a unique collaboration with the two oldest observatories in Ireland. “The Life of Galileo” and its central drama of the conflict between science, religion and authority, is a story that resonates today. Dunsink, with its scientific heritage and educational remit, is the ideal location for the performance of David Hare’s more accessible version of Brecht’s play.

First performed by the National Theatre, Greenwood Theatre Company produced the Irish premiere of this version in Armagh Observatory in February, followed by St George’s Church in Belfast as part of the Cathedral Quarter Arts Festival, “The Life of Galileo” will be performed in Dunsink Observatory in Dublin in the run up to Science Week.

The Greenwood Theatre Company is a new and exciting semi-professional theatre company that specializes in site-specific theatre. Producer Enid Crowe said, “This will be an incredibly intense, atmospheric experience for the necessarily small audience, building on our most recent production, the acclaimed ‘Under the Greenwood Tree’, which was inspired by and performed in August 2011 and June 2012 under the ancient oaks of Belvoir Forest, Belfast”.

This is a first for both the Greenwood Theatre Company and Dunsink Observatory. The audience will have the opportunity to get very close to the action in various parts of the building including the 150 year old South Dome, the Solar System Room and the historic Meridian Room where “Dublin Time” was kept.

Indeed, as remarked by Ian McDonald, author and Executive Producer with the Greenwood Theatre Company, “The Life of Galileo is a story that needs retelling every generation, especially in a 21st century when we seem to be moving away from science to an authority or belief-based worldview.”