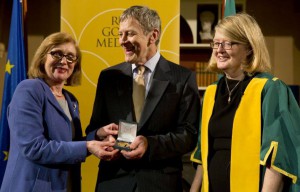 The Royal Irish Academy Gold Medal for Science has been awarded to one of the Dublin Institute for Advanced Studies professors of theoretical physics, Professor Werner Nahm.

DIAS is delighted that one of our distinguished academics has been honoured with this prestigious medal, confirming our position as Ireland’s premier research institute for theoretical physics.

The RIA Gold Medals are awarded to two outstanding academics each year and are recognised as a truly national expression of celebration for scholarly achievement. They were awarded by Minister Jan O’Sullivan at a special ceremony in the RIA, Dublin on Tuesday January 27th. The medals are sponsored by The Higher Education Authority, and the Gold Medal for the Humanities was awarded to Desmond Clarke, Professor (emeritus) of Philosophy at University College Cork.
Professor Nahm is a world leader in quantum field and in string theory.  He has been awarded several international prizes, as well as the ultimate accolade for a mathematician: equations have been named after him – the Nahm Equations. In 2013 he was awarded the Max Planck Medal for Theoretical Physics, the highest award from the German Physical Society, awarded for “those contributions that build on the work of Max Planck”. Past recipients of the medal include Einstein, Heisenberg, Schrödinger, Fermi and Dirac.
Prof Nahm has also contributed to feasibility studies for exploiting renewable energy sources, and among his many gifts is his fluency in languages including mandarin Chinese. Originally from Germany, Prof Nahm worked at CERN for several years, and as a professor at the University of California, Davis, and at Bonn University, before joining DIAS in 2002.
About Professor Werner Nahm:
Professor Nahm is a Senior Professor and Director of the School of Theoretical Physics at DIAS. He is a member of the Royal Society since 2011 and in 2012 he was awarded the Gothenburg Lise Meitner prize. This nomination referred to Professor Nahm’s important pioneering work on supersymmetry and on magnetic monopoles.
Professor Nahm received the Max Planck Medal for his fundamental work on quantum field theory. In particular, he was able to clarify several basic mathematical aspects that later became important for the development of string theory.
Nahm frequently exploits his vast knowledge and understanding to achieve progress in a wide range of subjects, including ancient Mayan history and writing. In 2013, he published a study that appears to have solved a 100-year-old problem, namely calculating the dates for the great Mesopotamian rulers in the 2nd millenium BC. This interdisciplinary work combines the study of Venus observations, tree- ring data and the dates for historical solar eclipses, with that of cuneiform documents, in particular concerning the sequence of Assyrian year eponyms.