President of Ireland Michael D. Higgins welcomed members of DIAS to Áras an Uachtaráin on Thursday 3rd December on the occasion of the 75th Anniversary of the foundation of DIAS. 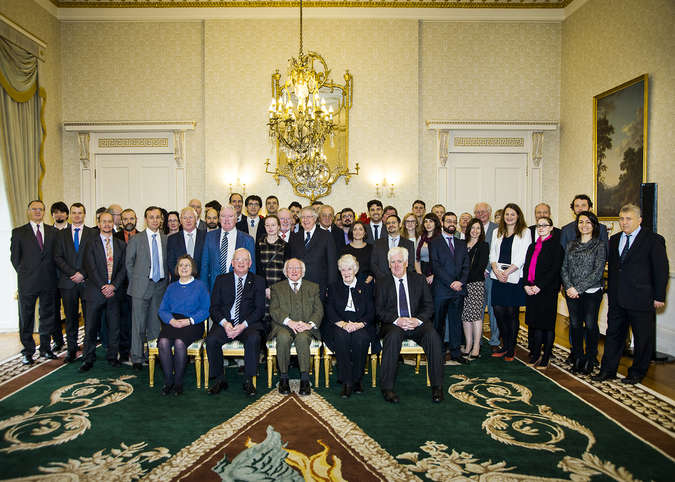 Speaking Notes for President Michael D. Higgins
on the occasion of a  visit to  Áras an Úachtaráin
to mark the 75th Anniversary of the Institute for Advanced Studies
Tuesday 3rd December 2015

You are all very welcome here today to Áras an Uachtaráin  as part of your celebration of  the 75th anniversary of the Institute for Advanced Studies.

The Institute stands as a great reminder of, and testament to, the importance of innovation and excellence in research in our society.  When the Institute was created by my predecessor as President of Ireland, Eamon de Valera, it reflected not only his interest in the importance and beauty of mathematics, but also the great respect he had for our native Irish language.

The Institute was established just three years after the adoption of Bunreacht na hÉireann and in the First Presidency of An Craoibhín Aoibhinn, Dubhghlas de hÍde or Douglas Hyde.

The establishment of a high level research Institute, modeled on the Institute for Advanced Study in Princeton and inspired by the will to revive the declining Dunsink Observatory, was an important founding stone for the development of science in Ireland, and ultimately to the progress and prosperity that would follow.

The Institute was instrumental in promoting a focus on scientific achievement in a country that was long renowned for its inventiveness and original thinking, but where research in the scientific disciplines was underdeveloped, and not well disseminated among our own people. The Institute, by persuading government to place science firmly on Ireland’s policy agenda, ultimately enabled Ireland to play its role in the shaping of the technological age that we inhabit today.

Ireland has a rich history of scientific work. Irish scientific achievements represent many milestones in the journey of modern Western rationality including the splitting of the atom, the development of fibre optics in communication and the effectiveness of the Mariners’ compass.  We might automatically think of Robert Boyle and William Hamilton when discussing our scientific heritage, but amongst our great Irish scientists we can also claim John Tyndall, who explained why the sky is blue; Nicholas Callan, who invented the induction coil; William Parsons, 3rd Earl of Rosse, who built the world’s largest telescope and used it to locate new structures in the heavens; George Gabriel Stokes, who investigated the phenomenon of fluorescence and advanced the wave theory of light; William Thomson, 1st Baron Kelvin, who contributed so much to the transatlantic telegraph project; John Lighton Synge, who pioneered the study of black holes; or George Francis Fitzgerald, whose understanding of the laws of motion provided an essential building block for the Special Theory of Relativity. And of course most recently William Campbell brought great honour to Ireland when he shared the 2015 Nobel Prize for Medicine.

During my visits abroad as President of Ireland I am always happy to speak of our rich history of scientific work and of our accomplishments in the area of science and technology . Indeed, a highlight of my State Visit to the United Kingdom last year was my visit to the Royal Society of which Eamon De Valera was, of course, a Fellow. The community of scientists on our two islands has led the world in so many fields, and left such a valuable legacy for humanity. I was very grateful to have that opportunity to pay tribute to the productive collaborations that bring together British and Irish scientists, alliances which allow a shared horizon of possibilities.

I spoke, on that occasion, of how the humanities also have something essential to contribute to our comprehension of the nature of human consciousness or what it means to be human. The universe cannot be understood through its physical properties alone.  The profound connection which the Institute enables to our Celtic heritage, is a valuable one reminding us of how much of our culture is based on what we share, and providing an intellectual context in which we can understand how that shared and rich culture can enable us to shape and craft our own destiny.

The Institute’s role as a leading publisher of academic work in relation to Celtic studies, along with its seminars and lectures in this field and its facilities which enable the continued development of advanced studies in this important area remind us that the cultural and the scientific are both  sources of vision, enabling experimentation and diversity.

Seventy five years on, as we look back to the beginnings of the Institute, we realise the great branches that have grown from the initial roots sown by Erwin Schrödinger and Walter Heitler who, in its early days, built its reputation.  Their own great scientific work, and the younger talents that they nurtured, have left an outstanding legacy to this country. Indeed Erwin Schrödinger’s lecture series in 1943 entitled ‘What is Life’?  provided a high point in the intellectual life of this country and introduced some of the most significant theories in the history of biology; concepts which continue to frame how we see life today.

In Ireland we have, in recent decades, made significant progress in developing the scientific resources that will help us meet the challenges of the future and consolidate our international reputation for research excellence. The results achieved to date have been impressive. Ireland has emerged as a leading country for the quality of its scientific research, notably in fields such as immunology and probiotics, nanoscience, and materials science. Our country also ranks third in the European Union for innovation output.

There can be no doubt that the establishment of the Institute was a courageous move, in some ways a leap in the dark, but it was a move motivated by a will to look beyond the horizons and discover what was possible, what could be improved, and how realising a better future for Ireland realised embracing and promoting science. It was also a move that helped to establish the foundation on which our scientific reputation is now built.

Today the Institute for Advanced Studies remains an important intellectual space, a community of advanced scholarship, developing the ability of further generations to undertake advanced studies. Some of those studies will play an important role in the groundbreaking work that continues to make our society and our world better places in which to live. Others will enable us a greater understanding of the past and the heritage that has brought us to where we are today, allowing  us to better understand our place in the modern world.

The Institute reminds us of how, as a nation we must continue to value the importance of fundamental research, first rate  independent scholarly work on science and on text, of encouraging the emergence of the ability to push the boundaries outwards, our restless, creative energy and a curiosity that translates to a constant exploration of how elements combine and may be related to limitless possibilities and discovery.

All of you here today should be very proud to be part of an Institute which has left such a profound imprint on the scientific and intellectual dimensions of our society. We, in turn, are very grateful as a nation to those who continue to build and develop the reputation of a place which began life as a courageous vision. Today you have much to look back on with pride and much to look forward to as you voyage into new worlds of discovery.

May I conclude by thanking you all for visiting here today, and wishing you every success as you continue with your important work.