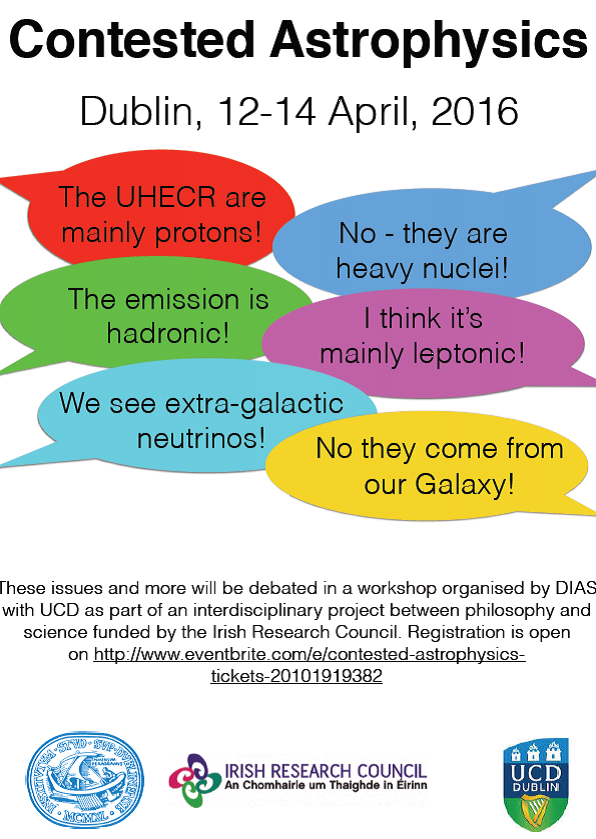 The Dublin Institute for Advanced Studies (DIAS), with the support of an interdisciplinary grant from the Irish Research Council (WEXD – When Experts Disagree), will hold a specialist workshop from Tuesday 12th to Thursday 14th April 2016 examining some disputed areas of high-energy astrophysics.

Admission is free but advance booking is required here.

A novel and interesting aspect of the meeting is that it will also be attended by some experimental philosophers interested in expert disagreement.

The focus will be mainly on areas of current disagreement and not so much on settled historical disputes although these are not excluded.  We propose to consider, inter alia, the question of where in the energy spectrum the transition between Galactic and extra-galactic cosmic rays occurs along with the closely related issues of the chemical composition of the highest energy cosmic rays and whether SNRs are the dominant Galactic sources.  We will also examine the disputes surrounding the leptonic or hadronic origin of gamma-rays in sources such as SNRs, AGNs and the Fermi bubbles as well as the origin of the HE neutrinos detected by Icecube. Participants are welcome to suggest further areas of disagreement for discussion – the sole criterion is that there be a genuine difference of opinion!

The meeting will be held in central Dublin in DIAS and registration is free.