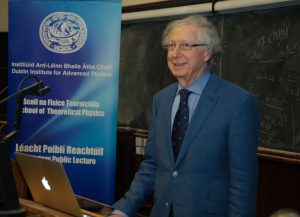 “Beauty and Truth in Mathematics and Physics”

Beauty, commonly accepted in the arts, is also central both in mathematics and in physics. In both disciplines one also strives to discover truth. But beauty and truth can have different meanings for a physicist and for a mathematician! We discuss how one might reconcile these contrasting views.

Arthur M. Jaffe is the Landon T. Clay Professor of Mathematics and Theoretical Science at Harvard University. His major research focuses on understanding quantum physics and the mathematics that it inspires. For his research in showing the mathematical compatibility of quantum theory with special relativity (by giving examples of non-linear fields in two and three dimensions), he received the Dannie Heineman Prize in Mathematical Physics, and the Physical Sciences Prize of the New York Academy of Science, jointly with James Glimm. In 1983 he authored the highly quoted essay “Ordering the Universe” for the US National Research Council, written to give intellectual justification for funding research in mathematics.  In 1993 he wrote the essay “Theoretical Mathematics” with Frank Quinn, describing recent interactions between mathematics and theoretical physics.  One year after its publication, the Bulletin of the AMS devoted an entire issue to discussion of that article.

Jaffe served as president of International Association of Mathematical Physics for two consecutive terms, and of the American Mathematical Society during 1997/1998.  He conceived and guided the conception of the Clay Mathematics Institute, including serving as its first President 1998-2002, when he was responsible for the “Millennium Prize Problems in Mathematics.”  Since 2005 he has chaired the Board of the DIAS School of Theoretical Physics.  He is a Fellow of the American Academy of Arts and Sciences, a Member of the U.S. National Academy of Sciences, and an Honorary Member of the RIA.