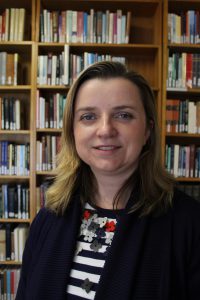 Margaret completed a Bachelor of Arts degree in History and Media & Communications at the University of Limerick / Mary Immaculate College in 1996. She worked in the area of genealogical research and libraries before obtaining a Postgraduate Diploma in Library & Information Studies from University College Dublin in 2001. Margaret subsequently worked in third level academic and medical libraries before taking up the role of Librarian in the School of Celtic Studies in 2006. Margaret is a member of the Library Association of Ireland and was a committee member of the Academic & Special Libraries Section from 2007-2013, holding the role of Secretary from 2009-2011.