John Quinn is an Associate Professor in the School of Physics at University College Dublin (UCD) and has been involved in the field of ground-based gamma-ray astronomy for 25 years. His PhD was conducted at UCD, under the supervision of Prof. David Fegan. and as a predoctoral fellow at the Smithsonian
Astrophysical Observatory’s Fred Lawrence Whipple Observatory in Arizona, under the supervision of
Prof. Trevor Weekes, where the atmospheric Cherenkov technique was pioneered and the first detections
of astronomical sources of VHE gamma rays were achieved. 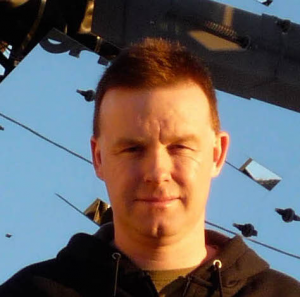 After completing a postdoctoral fellowship, also at the Fred Lawrence Whipple Observatory, Prof. Quinn returned to UCD in 1998 to join the academic staff. His research group in UCD has played a significant role in the development and ongoing operation of the VERITAS gamma-ray observatory in Arizona, and he is an active member of the Irish CTA consortium. His scientific
interests include studies of relativistic jets from Active Galactic Nuclei, and galactic high-energy sources. Prof. Quinn is a co-investigator on the I-LOFAR project and was a member of the team that recently installed a LOFAR radio telescope in Birr, Co. Offaly. Prof. Quinn is also involved in the delivery of both lecture and laboratory courses in Physics and Astrophysics at UCD.