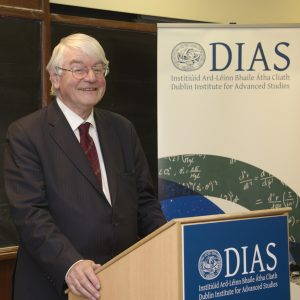 The Thirty-fifth Hugh M. Fitzpatrick Lecture in Legal Bibliography took place at DIAS on Tuesday 28th November. The lecture entitled “De Valera and the creation of an independent Irish constitutional tradition” was given by Dr Martin Mansergh. The lecture was chaired by Síle de Valera, former Minister for Arts, Heritage, Gaeltacht and the Islands. An abstract of the lecture and a biography of Dr Mansergh are given below. Watch the lecture here.

De Valera and the Creation of an Independent Irish Constitutional Tradition

As a member of Cumann na mBan, who was in the GPO, said in an interview afterwards, the purpose of the Rising was to create a national life of our own. The essence of this is expressed in Article 1 of Bunreacht na hÉireann, which is a comprehensive statement of political, economic and cultural national self-determination.

The roots of constitutional and democratic politics in Ireland lie in the mass movements of O’ Connell and Parnell. The concept of national self-determination goes back to 1790 and a lawyer in the French National Assembly Merlin de Douai. From the late 18th century, the most advanced vision was to create a national democracy in the form of a republic following the American and French models, but borrowing heavily from British legal, parliamentary, and administrative traditions, all of which would be suffused by Gaelic and Catholic values.

Many people contributed to the creation and subsequent development of the Irish State, now celebrating nearly a century of existence. De Valera not only helped to bring it into being as political leader of the independence struggle, but contributed decisively, after the misstep of the civil war, to the consolidation of democracy. He wanted above all for independent Ireland to be rooted in institutions with their own legitimacy, and not in a concession by Treaty or British Act of Parliament. In many respects, he was able to build on the work of his predecessors, with the continuity and progression as much as the break being more evident today.

Dr Martin Mansergh is Vice-Chair of the Expert Advisory Group on Commemorations. Between 2002 and 2011, he was a Fianna Fáil Senator, then TD (for Tipperary South), and Minister of State for OPW, Finance and the Arts. He was a member of the British-Irish Parliamentary Body, and President McAleese’s second Council of State. Former diplomat, then political advisor to Charles Haughey, Albert Reynolds, and Bertie Ahern, he was a back-channel to the Republican Movement, and, between 1992 and the 1994 IRA ceasefire, interlocutor with Martin McGuinness. He helped negotiate the Downing Street Declaration and the Good Friday Agreement. He is author of The Legacy of History, and co-winner of the 1994 Tipperary Peace Prize with Fr Alec Reid and Rev Roy Magee. Kevin Rafter published his biography in 2002.  He has been a columnist with the Sunday Business Post, the Irish Times, and the Irish Catholic.  He is a governor of Carlow College, and a board member of History Ireland.  Son of historian Nicholas Mansergh, he obtained a first-class Politics, Philosophy and Economics degree and a D Phil at Oxford, having attended King’s School Canterbury. He was recently conferred with a degree of Doctor of Laws, honoris causa, by the NUI.