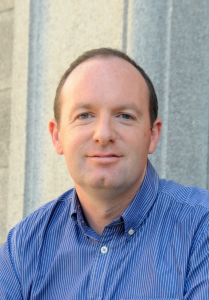 Name: Peter Gallagher
Title: Senior Professor & Head of Astronomy & Astrophysics Section
E-Mail/Web: peter.gallagher@dias.ie / www.dias.ie/petertgallagher
Address: Astronomy & Astrophysics Section, 31 Fitzwilliam Place, Dublin D02-XF86, Ireland
Research Interests: Prof. Gallagher leads solar physics and space weather research and is Head of the Astrophysics Section at DIAS. His reseach is primarly concerned with understanding the fundamental physics of solar storms and their impacts on Earth. He has a long association with ESA and NASA, and is head of the I-LOFAR radio telescope project at Birr Castle and Dunsink Observatory.

Biographical Sketch: Prof. Gallagher received a BSc (HONS) in physics and mathematics from University College Dublin in 1995, followed by an MSc (Distinction) in optoelectronics and image processing and a PhD in solar physics from Queen’s University Belfast. He then spent six years in the US, firstly as a Postdoctoral Research Fellow at Big Bear Solar Observatory in California and then as a Scientist and Senior Scientist at NASA Goddard Space Flight Center. Following 12 years developing highly successful Astrophysics teaching and research programmes at Trinity College Dublin, he became a Senior Professor and Head of Astrophysics at DIAS.

Prof. Gallagher is a Member of the Institute of Physics (MInstP), a Fellow of the Royal Astronomical Society (FRAS), and chaired the Astronomical Sciences Group of Ireland and vice-chaired the Royal Irish Academy’s Astronomy and Space Research Committee. He was a member of ESA’s Solar System Working Group (2007-2009) and was a Member of ESA’s Space Science Advisory Committee (2017-2019).