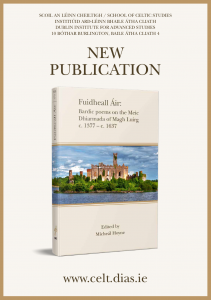 The Mac Dermot lords of Moylurg in the north of present-day Co. Roscommon were one of the most powerful families in Connacht in the later Middle Ages. Today, all that survives of what must once have been an extensive body of Classical Modern Irish poetry dedicated to members of this family are twenty-two Bardic poems scattered throughout medieval and modern manuscripts. These surviving poems range in date from the late fourteenth century to the early seventeenth, a period that saw some of the most important and dramatic events in Irish political and cultural history. They are important witnesses to the Gaelic Resurgence, the fifteenth-century religious revival, the Tudor Conquest and the collapse of the Bardic order, and provide unique insight into the history of an influential Connacht family across four centuries. The value of these poems is all the greater as they were produced by a range of poets, from obscure local poet-historians to famous virtuoso panegyrists like Eochaidh Ó hEódhasa. In this volume nine poems are edited and translated with extensive linguistic and historical commentary, making available nearly all that remains unedited of this valuable corpus of poetry, together with a study of the whole corpus and the interpretive challenges it poses. The editions and accompanying discussion should be of interest to scholars of Irish language and literature and historians of the period.