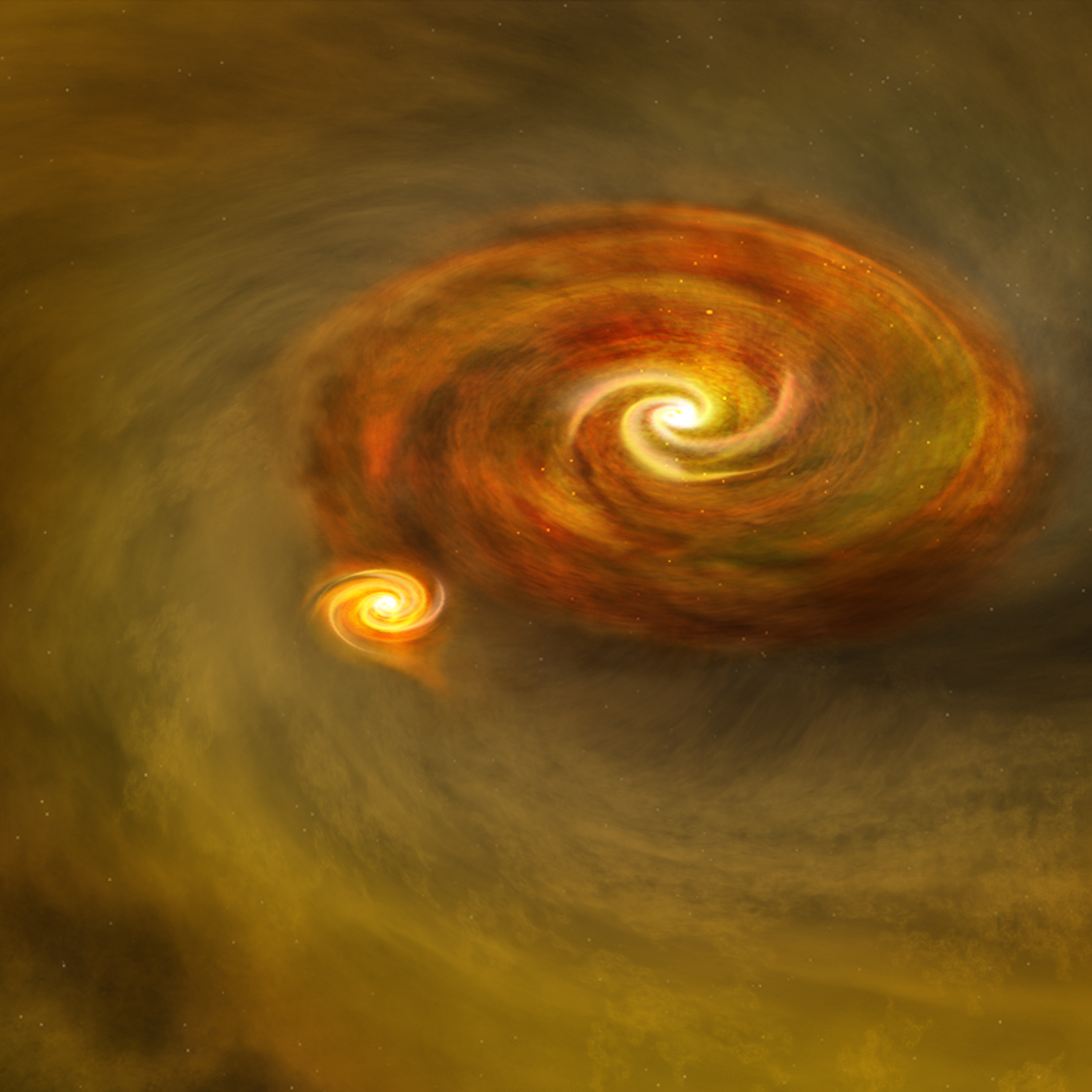 An international team which includes Dr Alessio Caratti o Garatti – a researcher from the School of Astronomy and Astrophysics at the Dublin Institute for Advanced Studies – has determined the distance between the massive young star PDS 27 and its orbiting stellar companion to be just 30 astronomical units away or 4.5 billion km. That is roughly the distance between our Sun and Neptune, making them the stellar companions with the closest proximity ever determined for young high mass stars in a binary system – a star system with two stars in orbit around a centre of mass.

Study lead author, Dr Evgenia Koumpia, from the School of Physics and Astronomy at Leeds, said: “This is a very exciting discovery, observing and simulating massive binaries at the early stages of their formation is one of the main struggles of modern astronomy. With PDS 27 and its companion we have now found the closest, most massive young stellar objects in binaries resolved to date.

“There is a shortage of known young massive binary systems in charted space. High mass stars have comparatively short lifespans, burning out and exploding as supernovae in only a few million years, making them difficult to spot. This limits our ability to test the theories on how these stars form.”

As part of their study the team has also identified a companion object for another young massive star referred to as PDS 37. The analysis revealed a distance between PDS 37 and its companion to be between 42 to 54 astronomical units –comparable to the distance between the Sun and Pluto. While further apart than PDS 27 and its companion, it is still a significant discovery given the need for confirmed massive young stellar binaries in astronomical research.

Dr Koumpia continued: “How these binary systems form is quite a controversial question with several theories having been put forward. Observational studies of binaries in their early stages are crucial to verifying the theories of their formation.

“PDS 27 and PDS 37 are rare and important laboratories that can help inform and test the theories on the formation of high mass binaries.”

PDS 27 is at least 10 times more massive than our Sun, Dr Koumpia explained, and about 8,000 light years away. To determine the presence of stellar companions for PDS 27 and PDS 37, the team used the highest spatial resolution provided by the PIONIER instrument on the European Southern Observatory’s Very Large Telescope Interferometer (VLTI). This instrument combines light beams from four telescopes, each of which is 8.2 metres across, and mimics a single telescope with a diameter of 130m. The resulting high spatial resolving power allowed the team to resolve such close binary systems despite their huge distance from us and their close proximity to each other.

Study co-author Professor Rene Oudmaijer, also from the School of Physics and Astronomy at Leeds, said: “The next big question – which we have tended to avoid so far because of observational difficulties – is why so many of these massive stars are in binary systems?”

“It has become increasingly clear to astronomers that massive stars are almost never born alone, with at least one sibling for company. But the reasons why that is the case are still rather murky.

“Massive stars exert significant influence on their cosmic environment. Their stellar winds, energy and the supernova explosions they generate in turn can impact the formation of other stars and galaxies. The evolution and fate of high-mass stars is quite complex but previous studies have shown that they can be influenced to a large degree by their binary properties.

“The discovery of massive young binary stars provides a crucial step forward in being able to answer many of the questions we still have about these stellar objects. These discoveries were only possible thanks to the exquisite resolving power provided by the PIONIER instrument on the VLTI.”

This research is published in the journal Astronomy & Astrophysics: Letters.