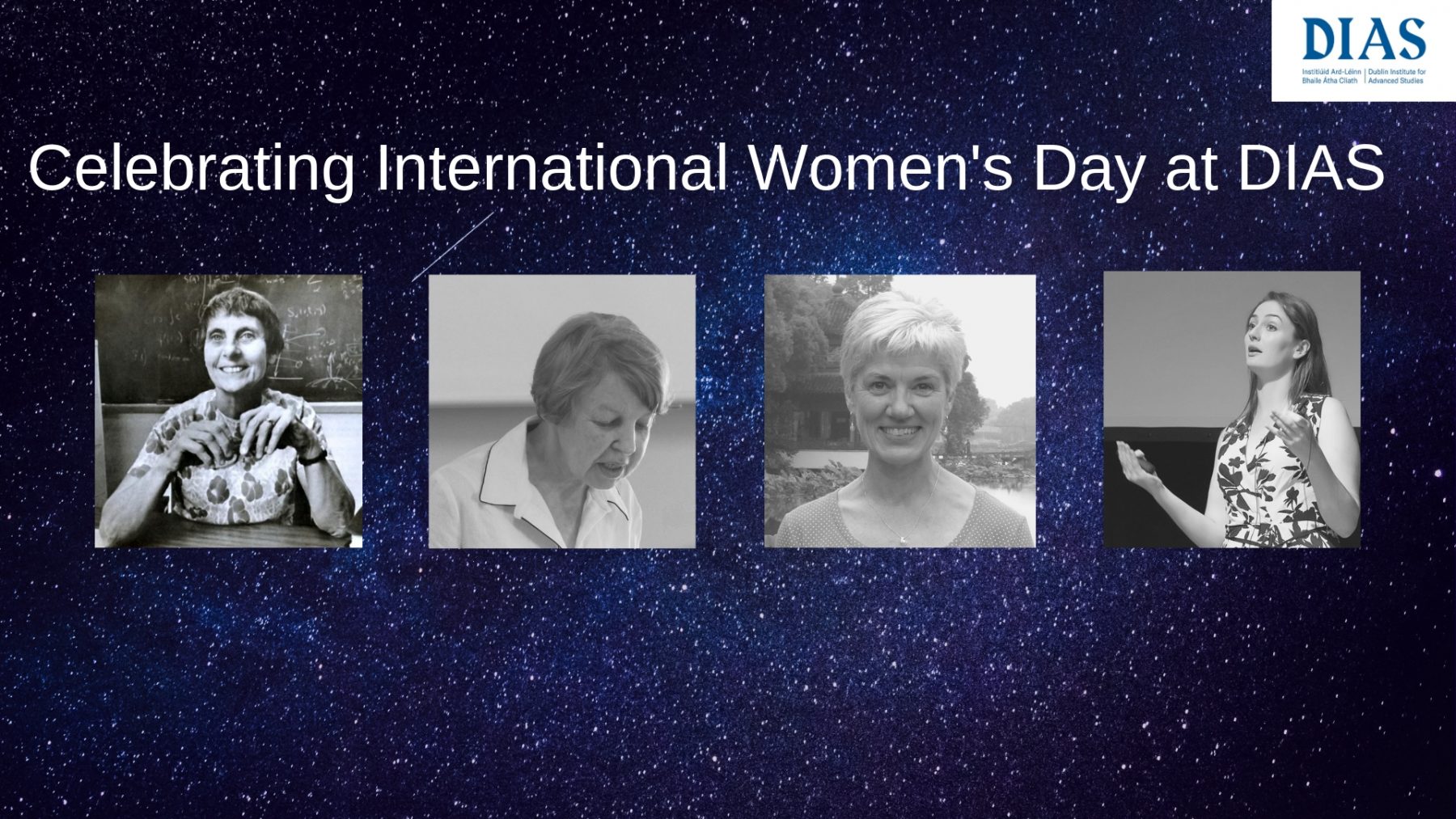 There is a fantastic legacy of talented female researchers at DIAS. Women who have gone on to excel in their respective fields and achieve remarkable things. In January we honoured one of those women – the late Sheila Tinney – by unveiling a portrait of her that now proudly hangs in the boardroom at DIAS, Burlington Road.

In keeping with this, and to mark International Women’s Day, we are profiling four former scholars of DIAS and shining a light on the tremendous achievements of their careers. They include: Máire Herbert from the School of Celtic Studies; Anna Scaife from Astronomy & Astrophysics, and Carmel Lowe from Geophysics (both in the School of Cosmic Physics) and the late Cecile DeWitte-Morette from the School of Theoretical Physics.

Sheila Tinney was in good company during her time at DIAS – with Cecile DeWitte-Morette as a colleague. The late French-American Physicist is known for her contributions to mathematical physics, her various publications and for founding the Les Houches Summer School in the French Alpes in 1951.

Cecile rubbed shoulders with many of the greats during her time – including working in the nuclear physics lab of Irène Joliot-Curie (daughter of Marie and Pierre) and her husband, Frédéric and following that under the supervision of Erwin Schroedinger and Walter Heitler during her postdoctoral position at DIAS in 1947.

She was later invited to Princeton as a visiting researcher. It is said that during her studies there she spent time with Albert Einstein where they would walk together to their respective offices at the Institute for Advanced Study as they were the only ones without cars!

Among the attendees at Cecile’s summer school include over twenty students who went on to become Nobel Prize winners. Cecile was awarded the American Society of the French Legion of Honour Medal for Distinguished Achievement in 2007. We are very proud to have hosted her as a Fellow at DIAS.

Her main work focused on building on a thesis she had just completed on poems associated with Colum Cille. She expanded on this to include other Columban literature – especially hagiography. She notes that during her time at the School she learned a great deal about the research process, editing texts and gained great insight from interaction with fellow scholars and staff.

After her time at DIAS, Máire went to Cambridge to further her studies. There she was inspired by other formidable researchers such as Kathleen Hughes who she notes as being “an inspirational teacher…truly interdisciplinary in her scholarship, long before the term – or even the concept – became current in our academic area.” In the course of her career as Professor in the Dept of Early and Medieval Irish at UCC, Máire has been a visiting fellow at Clare Hall, Cambridge and visiting professor in the Dept of Celtic Languages and Literatures at Harvard University. She was recently awarded the Derek Allen prize in Celtic Studies by the British Academy in September 2018.

Carmel Lowe was a Scholar at DIAS Geophysics in the 1980s. Under the supervision of Senior Professor Brian Jacobs at the Dublin Institute for Advanced Studies– she obtained her PhD in 1989 from Trinity College. Her thesis focused on the application of controlled source seismology and gravity to explain the structure and composition of the lithosphere beneath a north-south transect in Ireland.

Since leaving DIAS and moving to Canada over 20 years ago, Carmel’s career has been embellished with many impressive achievements. While studying at Caleton University in Ottawa, her research lead her to be among the first to explain why the Rocky Mountains have continued to retain their height.

In 2009, she was appointed as Director of Pacific Region at the Geological Survey of Canada in 2009 – a position she held until her resignation in 2014. As the Director, she was responsible, among other things, for the development and implementation of Canada’s national research strategy to assess and mitigate the risks associated with a variety of natural hazards including earthquakes, tsunamis, volcanoes, landslides, and geomagnetic storms.

In 2014, Carmel accepted an appointment as the Regional Director of Science in Canada’s Department of Fisheries and Oceans – a position she holds to this day. She currently manages a 600 strong group of biological, physical and chemical researchers, scientists and technical staff across four major science centres and 5 satellite offices throughout Canada’s Pacific Region.

Anna Scaife was a postdoctoral researcher at DIAS from 2009 – 2011. During her time at the School, one of the key pieces of research she was engaged in was investigating the origin of a new and unexpected type of astrophysical radiation involving significant observational studies. It was while studying at DIAS, Anna first met Jane Greaves, who is now at Cardiff University. Jane and Anna continue to collaborate and recently published a paper in Nature which includes some observations that were taken by Anna at DIAS.

In a few short years, Anna has won a highly competitive European Research Consolidator Grant, become Professor of Radio Astronomy at the University of Manchester and Head of the Jodrell Bank Centre for Astrophysics Interferometry Centre of Excellence. Just this year, she was awarded the Royal Astronomical Society Jackson-Gwilt Medal in recognition of her contributions to astrophysical instrumentation.

Anna notes that her time at DIAS was influential in her career, as she had the opportunity to work with Tom Ray – an expert in star formation for many years, and also one of the few people who has specialised in analysing radio emission from low-mass protostars – one of the key focuses of her own work.

The work and achievements of these four female scholars who have passed through the doors of DIAS is undeniable, and we will continue to champion them for many years to come. Anna Scaife said, “Working at DIAS makes you feel like part of a larger scientific story, because there is so much history attached to the Institute.” These remarkable women are an example of why our history is so rich and why we are able to compete on a national and international level and contribute to the larger story.