On Friday 11th September, a DIAS Astrophysics research group led by Dr Jonathan Mackey (Royal Society – Science Foundation Ireland University Research Fellow) was announced as one of seven academic projects which will be supported by the new Academic Flagship Programme of the Irish Centre for High-End Computing (ICHEC), Ireland’s High-Performance Computing authority. The name of the successful DIAS project is 3D Simulations of Nebulae Around Massive Stars. 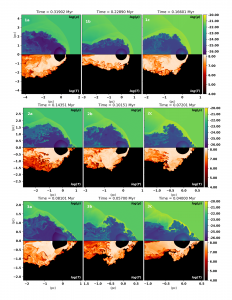 Joint Undertaking, a large pan-European initiative to create a network of 33 high-performance computing (HPC) competence centres. The objective of ICHEC’s Academic Flagship Programme is to increase the competitiveness of Irish academic groups when applying for access to the biggest European supercomputers, known as Tier-0 type HPC resources internationally. This will be done by providing hands-on performance engineering assistance for researchers to scale up and optimize their application codes for these supercomputers. Under this scheme, researchers will submit a PRACE Preparatory Access application with support from ICHEC, and by the end of the two-year project will submit a full application for a large project to EuroHPC Tier-0 systems.

Dr Mackey’s project will focus on implementing hybrid parallelization into 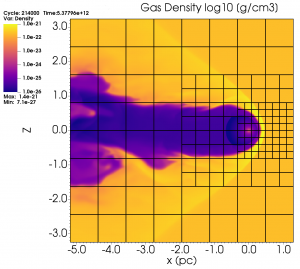 PION, open-source software developed in-house at DIAS by Dr Mackey and his group, to enable 3D magnetohydrodynamic modelling of wind-driven nebulae around massive stars. This will allow Dr Mackey’s group to plan more ambitious projects to give us new understanding of massive stars and their beautiful nebulae. The experience his research group will gain through the EuroHPC Academic Flagship Programme will open doors for new international collaborations and funding opportunities. For DIAS, it represents another fruitful collaboration in the HPC field. DIAS has played a key role in the establishment of research infrastructures nationally and its leadership of inter-institutional consortia in HPC culminated in the establishment of ICHEC in 2005. Through projects like this, DIAS is leading Ireland’s access to the EU High Performance Computing Programme.

Commenting today, Dr Mackey says, “I am very excited to be part of this important European initiative to support researchers developing software designed for current and next generation supercomputing facilities. This collaboration with ICHEC is great for my research group at DIAS, providing invaluable technical expertise and helping us to tackle difficult scientific questions with advanced computing methods. It will be of great benefit particularly for the younger members of my research group, giving them access to large European HPC Infrastructure.”

Massive stars are extreme objects, very luminous, with strong winds driven from their surface that produce beautiful and enigmatic nebulae in the night sky. Despite intensive research, many aspects of the evolution of massive stars are poorly understood. Our lack of knowledge impacts on other emerging fields of study such as gravitational-wave astronomy and very-high-energy astrophysics, as well as the more established fields of galaxy formation and evolution, interstellar medium, supernovae and stellar physics.

Researchers at DIAS will use the improved version of PION to run large and realistic 3D computer simulations of nebulae around evolving massive stars, testing evolutionary predictions against observations, making predictions for particle-acceleration and high-energy radiation, and studying supernova interaction with wind-blown nebulae for stars that reach the end of their lives and explode. Technical advances from the EuroHPC Academic Flagship Programme work will enable detailed investigation of massive binary systems, where winds from two or more massive stars collide. Results from large simulations on Tier-0 European supercomputers will be confronted with observations to gain new insights into particle acceleration, stellar winds, and high-energy radiation processes.

More on this can be found here.