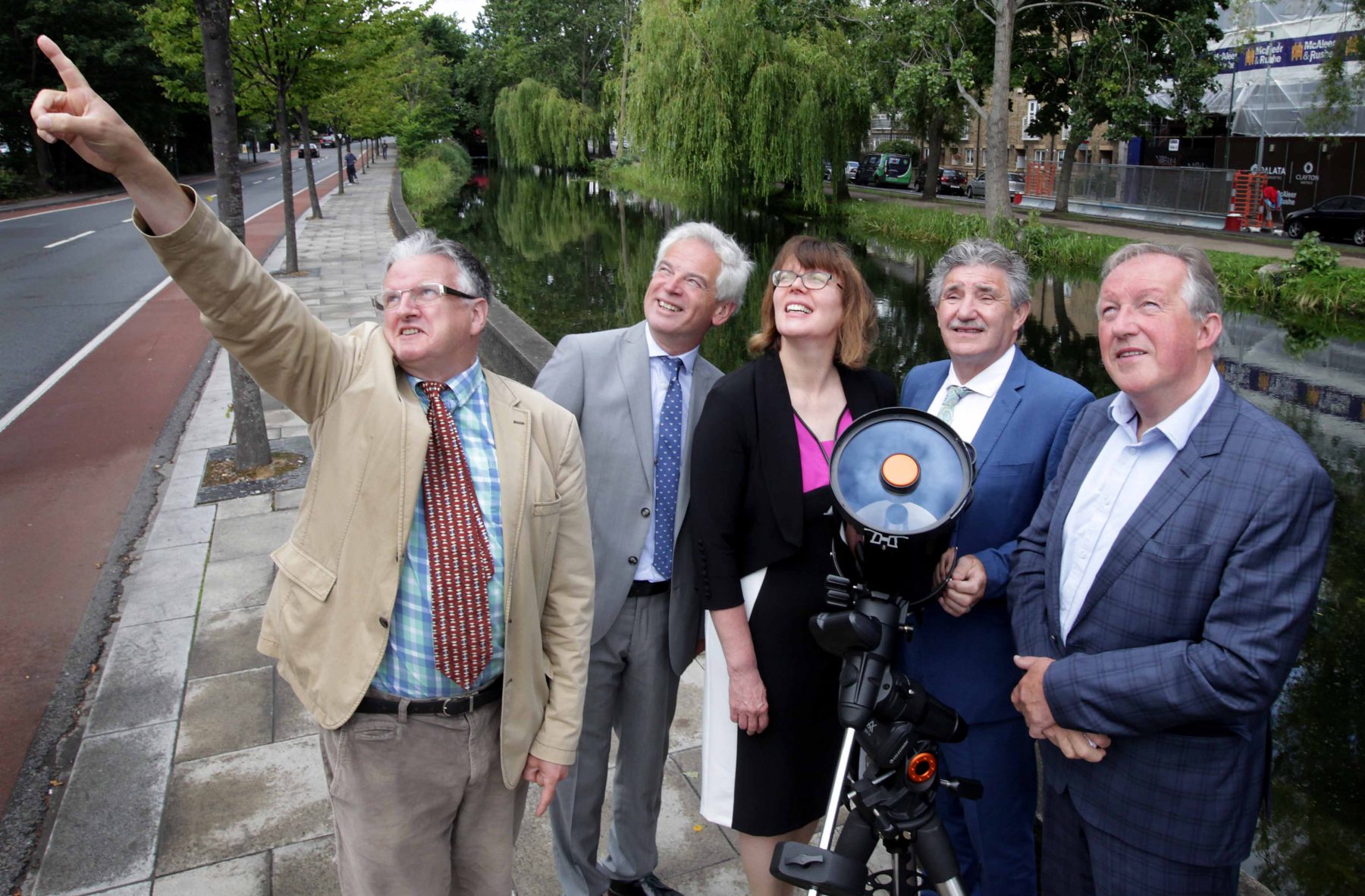 John Halligan TD, Minister of State for Skills, Training, Innovation, Research and Development, has today (30.07.18) unveiled a plaque to commemorate the contribution of Thomas Grubb to astronomy in Ireland and worldwide.

In the 1830s, Thomas Grubb pioneered telescope manufacturing from his base close to Charlemont Bridge on Dublin’s Grand Canal.  Now, the National Committee for Science and Engineering Commemorative Plaques, the Dublin Institute for Advanced Studies (DIAS) and the Construction Industry Federation (CIF) have come together to erect a permanent marker commemorating Grubb’s achievements.

The plaque unveiled today is located at the site of Grubb’s first engineering works in Dublin – on Canal Road in Dublin 6.  The site is now Construction House, the headquarters of CIF.

“He first began producing telescopes in Dublin in 1837.  His firm grew rapidly over the years and became one of the leading telescope manufacturers in the world.  At its height, Grubb and Son employed over 400 people.

“Grubb’s contribution to astronomy was immense: his firm contributed to telescopes in India, Australia, South Africa and the Crimea, as well as Greenwich and Dublin.  I am delighted to be commemorating his significant achievements by unveiling this plaque today.”

Professor Tom Ray of DIAS – an expert in Astronomy – said: “Grubb’s work was of such high quality that much of the equipment the firm built is still in use today.

“A fine example of his work can be seen in Dunsink Observatory, part of the Dublin Institute for Advanced Studies.  This telescope, known as the South Refractor, is still used by the public to view the stars and planets.  Despite being 150 years old, its Victorian clock mechanism and mechanics function perfectly.

“The instruments developed by the Grubb firm were critical in proving Einstein’s Theory of Gravity and revealing the presence of Dark Matter.  A Grubb lens and coelostat – a device for feeding the lens with a stationary image of the sun – were used in the 1919 eclipse expedition that tested Einstein’s Theory; and were fundamental in proving Einstein correct.  Both devices are now in the possession of DIAS.

“The 19th Century was a time of huge innovation and excitement in astronomy, and Ireland played a key role.  It is fitting, therefore, that a permanent marker has now been erected to commemorate Thomas Grubb, Ireland’s telescope-maker extraordinaire.”

In addition to Minister Halligan and Professor Ray, today’s unveiling was attended by Dr. Eucharia Meehan, CEO and Registrar of DIAS; Tom Parlon, Director General of the CIF; and members of the history of science and astronomical communities in Ireland.

Further information is available at www.dias.ie.