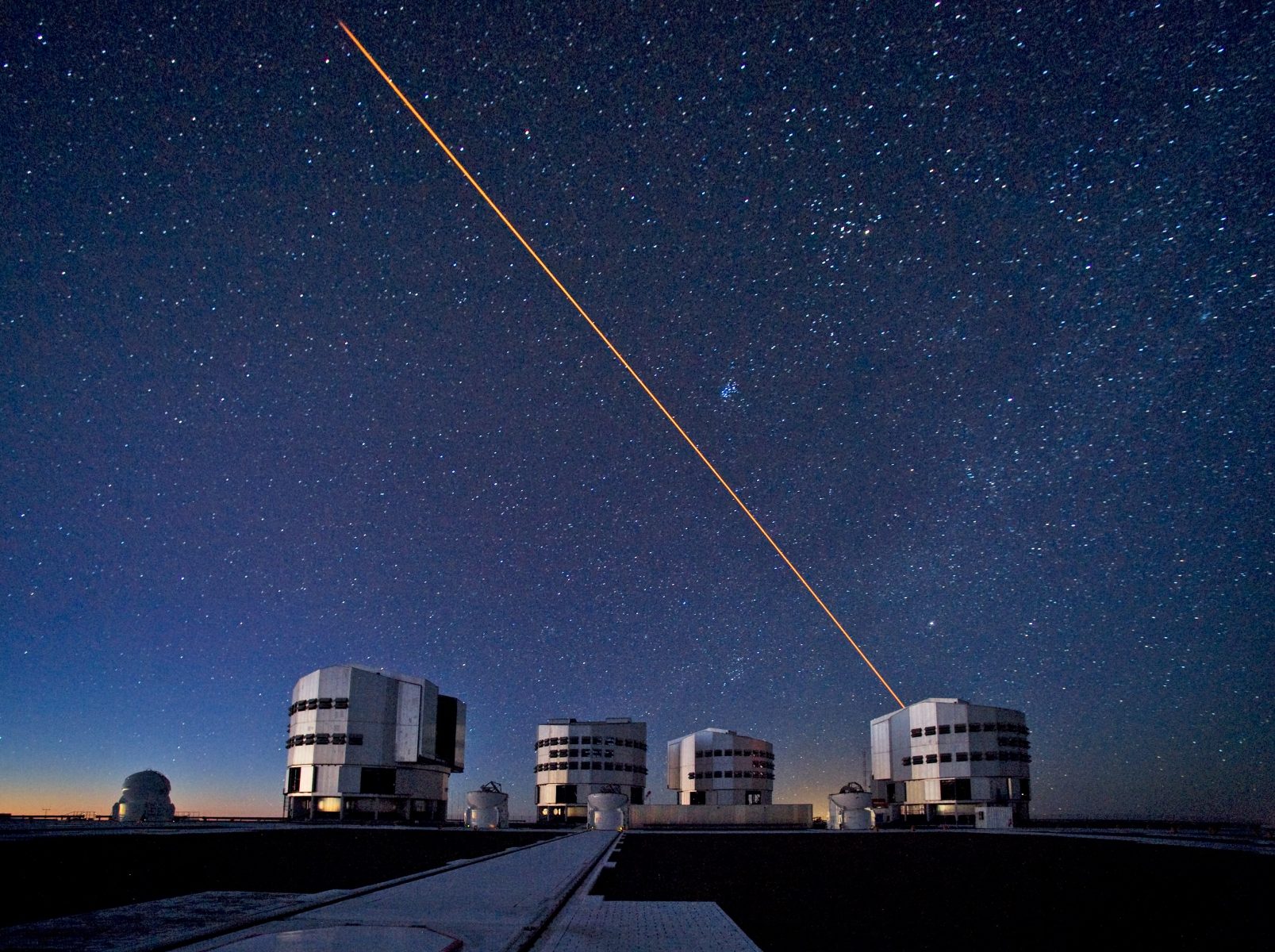 The GRAVITY instrument on ESO’s Very Large Telescope Interferometer (VLTI) has made the first direct observation of an exoplanet using optical interferometry. This method revealed a complex exoplanetary atmosphere with clouds of iron and silicates swirling in a planet-wide storm. The technique presents unique possibilities for characterising many of the exoplanets known today.

Dr Rebeca Garcia Lopez from DIAS was part of the research team that has been working on the discovery.

This result was announced today in a letter in the journal Astronomy and Astrophysics by the GRAVITY Collaboration [1], in which they present observations of the exoplanet HR8799e using optical interferometry. The exoplanet was discovered in 2010 orbiting the young main-sequence star HR8799, which lies around 129 light-years from Earth in the constellation of Pegasus.

Today’s result, which reveals new characteristics of HR8799e, required an instrument with very high resolution and sensitivity. GRAVITY can use ESO’s VLT’s four unit telescopes to work together to mimic a single larger telescope using a technique known as interferometry [2]. This creates a super-telescope — the VLTI  — that collects and precisely disentangles the light from HR8799e’s atmosphere and the light from its parent star [3].

HR8799e is a ‘super-Jupiter’, a world unlike any found in our Solar System, that is both more massive and much younger than any planet orbiting the Sun. At only 30 million years old, this baby exoplanet is young enough to give scientists a window onto the formation of planets and planetary systems. The exoplanet is thoroughly inhospitable — leftover energy from its formation and a powerful greenhouse effect heat HR8799e to a hostile temperature of roughly 1000 °C.

This is the first time that optical interferometry has been used to reveal details of an exoplanet, and the new technique furnished an exquisitely detailed spectrum of unprecedented quality — ten times more detailed than earlier observations. The team’s measurements were able to reveal the composition of HR8799e’s atmosphere  — which contained some surprises.

“Our analysis showed that HR8799e has an atmosphere containing far more carbon monoxide than methane — something not expected from equilibrium chemistry,” explains team leader Sylvestre Lacour researcher CNRS at the Observatoire de Paris – PSL and the Max Planck Institute for Extraterrestrial Physics. “We can best explain this surprising result with high vertical winds within the atmosphere preventing the carbon monoxide from reacting with hydrogen to form methane.”

The team found that the atmosphere also contains clouds of iron and silicate dust. When combined with the excess of carbon monoxide, this suggests that HR8799e’s atmosphere is engaged in an enormous and violent storm.

“Our observations suggest a ball of gas illuminated from the interior, with rays of warm light swirling through stormy patches of dark clouds,” elaborates Lacour. “Convection moves around the clouds of silicate and iron particles, which disaggregate and rain down into the interior. This paints a picture of a dynamic atmosphere of a giant exoplanet at birth, undergoing complex physical and chemical processes.”

This result builds on GRAVITY’s string of impressive discoveries, which have included breakthroughs such as last year’s observation of gas swirling at 30% of the speed of light just outside the event horizon of the massive Black Hole in the Galactic Centre. It also adds a new way of observing exoplanets to the already extensive arsenal of methods available to ESO’s telescopes and instruments — paving the way to many more impressive discoveries [4].

[1] GRAVITY was developed by a collaboration consisting of the Max Planck Institute for Extraterrestrial Physics (Germany), LESIA of Paris Observatory–PSL / CNRS / Sorbonne Université / Univ. Paris Diderot and IPAG of Université Grenoble Alpes / CNRS (France), the Max Planck Institute for Astronomy (Germany), the University of Cologne (Germany), the CENTRA–Centro de Astrofisica e Gravitação (Portugal) and ESO. [2] Interferometry is a technique that allows astronomers to create a super-telescope by combining several smaller telescopes. ESO’s VLTI is an interferometric telescope created by combining two or more of the Unit Telescopes (UTs) of the Very Large Telescope or all four of the smaller Auxiliary Telescopes. While each UT has an impressive 8.2-m primary mirror, combining them creates a telescope with 25 times more resolving power than a single UT observing in isolation. [3] Exoplanets can be observed using many different methods. Some are indirect, such as the radial velocity method used by ESO’s exoplanet-hunting HARPS instrument, which measures the pull a planet’s gravity has on its parent star. Direct methods, like the technique pioneered for this result, involve observing the planet itself instead of its effect on its parent star. [4] Recent exoplanet discoveries made using ESO telescopes include last year’s successful detection of a super-Earth orbiting Barnard’s Star, the closest single star to our Sun, and ALMA’s discovery of young planets orbiting an infant star, which used another novel technique for planet detection.

This research was presented in the paper “First direct detection of an exoplanet by optical interferometry” in Astronomy and Astrophysics.

ESO is the foremost intergovernmental astronomy organisation in Europe and the world’s most productive ground-based astronomical observatory by far. It has 16 Member States: Austria, Belgium, the Czech Republic, Denmark, France, Finland, Germany, Ireland, Italy, the Netherlands, Poland, Portugal, Spain, Sweden, Switzerland and the United Kingdom, along with the host state of Chile and with Australia as a Strategic Partner. ESO carries out an ambitious programme focused on the design, construction and operation of powerful ground-based observing facilities enabling astronomers to make important scientific discoveries. ESO also plays a leading role in promoting and organising cooperation in astronomical research. ESO operates three unique world-class observing sites in Chile: La Silla, Paranal and Chajnantor. At Paranal, ESO operates the Very Large Telescope and its world-leading Very Large Telescope Interferometer as well as two survey telescopes, VISTA working in the infrared and the visible-light VLT Survey Telescope. Also at Paranal ESO will host and operate the Cherenkov Telescope Array South, the world’s largest and most sensitive gamma-ray observatory. ESO is also a major partner in two facilities on Chajnantor, APEX and ALMA, the largest astronomical project in existence. And on Cerro Armazones, close to Paranal, ESO is building the 39-metre Extremely Large Telescope, the ELT, which will become “the world’s biggest eye on the sky”.