The following papers were given at the School’s annual Tionól, 21-22 November, 2003.

Fabio Paolo Barbieri
A lake-legend of India, and light over the lake-legends of Wales

A folktale from Bihar, India, sheds light over the relationship between the widespread Welsh story of a city sunk for its wickedness under a lake and the legend of Maelgwn, Taliesin and Elphin.

This paper will be a brief survey of the various strands of traditions involving cynocephali found in Ireland and Wales primarily, although earlier Continental Celtic instances will also be mentioned. These fall into two types primarily: the cynocephali as an onomastic element, and the cynocephali as a fully-realized dog-headed being or race of same. Various examples of each will be treated, and it will be seen that the personal name element is essentially native, whereas the cynocephali as subhuman creatures is mainly due to external influences. Finally, some thoughts on the use of these creatures and what they might signify, the cynocephali as outsider/invader especially, will be ventured in conclusion.

This paper will examine the structure and content of the glossing of the Epistle to the Hebrews in Würzburg M.p.th.f12. It will compare this gloss-commentary with other Irish commentaries and deal with some of their common patristic sources.

An Old Irish wisdom-text Tecosca Cormaic has not gained much attention since its publication in 1909 by K. Meyer. In this paper we shall be looking at the starting passages of the text devoted to kingship.

We shall pursue a hypothesis that the subject-matter of §1, while exhibiting some details peculiar to the text of Tecosca Cormaic, also resembles the Is tre f.f. series of Audacht Morainn.

§3, though not directly concerned with kingship, does point to a king. We shall therefore propose that the paragraph was composed as an echo to §1-2. In favor of this interpretation are not only the repetition of the themes occurring in §1-2, but also parallelism in wording.

Following that, we shall argue that §2-3 form one semantic block, representing the different aspects of agreement between a king (dealt with in §2) and his people (§3). To support this hypothesis, some examples from the Old Irish legal treatise Críth Gablach, `Branching Purchase’ shall be presented.

Galanas was the status-based price on a man’s life, which was paid if he was killed. This payment, which was central to medieval Welsh law, was made by the killer and his kin. The law texts from the thirteenth to the fifteenth centuries specify many different types of killing but little attention has been paid to this variety. This paper intends to redress the balance by discussing types of killing ranging from heinous crimes to self-defence in the light of other legal systems.

The Middle Irish death-tale Aided Derbforgaill has been attracting growing attention lately. However most of the recent discussions concerning the tale has to do with the very evocative subject matter of the narrative. Since Marstrander’s edition in 1911 (Ériu V, pp. 201-218), very little attention has been paid to the text in terms of its manuscript tradition, dating and intertextuality. This paper shall present work in progress on my forthcoming Ph.D edition of the tale and will outline the manuscript history and relationship, the dating of the tale and the various dating criteria which have been put forward heretofore as well as giving a brief discussion of the tale’s relationship with Tochmarc Emire.

Peadar Mac Cuillinn
Native and natural: aspects of the concepts of right and freedom in Irish

This is the title of a book that I will be publishing shortly with Cork University Press. My intention is this talk is to outline some of the methodology that I have brought to bear on the material, both in terms of vocabulary and grammatical structure. The relevant approaches are current in the domain of linguistic anthropology and concern themselves with the reflexive and reciprocal relationship between language, history, society and culture. The principal words discussed in the book are: `dúchas’, `dual’ and `saoirse’ with other associated words and grammatical patterns as well.

The lecture will consider Caoineadh Airt Uí Laoghaire in the context of the oral-literary and cultural debate, discussing how and in what circumstances it may have been composed, taking account of the most recent scholarship on the subject.

Certain aspects of Colombanus’s writings, mostly unobserved by scholars, point strongly to his Irish background. His penitential, for example, contains Irish legal concepts; one of his letters contains reference to an Irishman whose name, badly botched in Walker’s edition, can be reconstructed; his Latin style relates well to Irish styles in Latin and Irish. These indicators place him more immediately in his Irish background.

The design of the new Bibliography of Irish Linguistics and Literature Database began early last year (2002). This presentation aims to provide some background information about the new database and its genesis, and also to give the first public demonstration of the entry and front-end systems. Built with the expertise of Gavin McCullagh, this database has been created using ‘open source’ utilities. The database engine used is MySQL, which is available without a license fee under the GNU General Public License (GPL). MySQL is ‘the world’s most popular open source database, recognised for its speed and reliability’. The web-based interface to the database has been written in PHP, i.e. a widely-used scripting language highly suitable for web development, which can be embedded into HTML. The database runs on the Apache Webserver on the RedHat Linux operating system, both of which are also ‘open source’ projects. Keeping in mind the dual purpose of producing a book and a web-based utility, LaTeX mark-up has been used to generate special symbols and formatting, most of which is translated into HTML for display on the web.

The assumption that Irish has three main dialects or dialect groups, corresponding to the three provinces of Ulster, Connacht and Munster is so ingrained in popular consciousness, and in much academic writing, that alternative views require particular advocacy. T.F. O’Rahilly proposed instead that ‘historically there were but two main dialects in Irish, a Northern and a Southern’ (IDPP 17). Two recent studies, one phonetic and one lexical, have instead emphasised a basic split between Ulster and the rest of Ireland. In this paper the conclusions to be drawn from a detailed study of isogloss patterns will be discussed.

This paper seeks to list the different categories of triads preserved in Welsh between 1250 and 1800. It will discuss the nature of the material listed in the triads, put them in their intellectual and cultural context drawing on parallels from the Irish and Scottish Gaelic tradition. Finally particular attention will be paid to some of the manuscript collections.

A saint is by definition a person who lives heavenly life while still on earth. Thus a saint is a liminal person who lives simultaneously in both the heavenly and the earthly plane and in whose person the two spheres concretely come together. The saint’s close connection to the heavenly is visibly demonstrated by his or her miracles. In this paper my focus is on the vertical miracles of saint Columba. These are miracles that involve heavenly apparitions such as angels and heavenly light. First I will look at the characters involved in these miracles and their spatial relationship to the heavenly apparitions, in order to find out some aspects of Adomnán’s vision concerning the people and places in the borderlines of heaven and earth. Secondly, I will focus on questions concerning holiness. What does holiness in practice mean? What does the dichotomy between heaven and earth mean for a saint? How does he exceed the limitations of mortal body and corporeal life?

The OIr. tale of the “Meeting of Líadain and Cuirithir” has been described as illogical and improbable on grounds that certain portions of the assumed original version have been lost in the manuscript tradition. I want to show that with the help of some minor and one major emendation in the text as we have it we can arrive at a complete story with a logical structure that leaves nothing open or unclear to the reader.

The relationships between the Connachta and the earliest Uí Néill kings have been debated with vigour by scholars such as Eoin Mac Néill, T.F. O’Rahilly & F.J. Byrne. This discussion has, however, been largely driven by interest in the high-kings of Tara and has not been considered from the perspective of Connacht politics. Our earliest reliable evidence for the provincial kingdom in Connacht is from the seventh century when a list of Uí Briúin high-kings is incorporated into the annals and when relationships between the Uí Néill and Connacht appears to have been those of favoured military allies. There are, however, indications in the Patrician documentation to suggest that earlier rulers of Connacht may, in fact, have been the Uí Ailello kings and that much of the annalistic account may have been written retrospectively.

This paper will consider the concluding passages of the texts of the medieval Irish voyage tale corpus (the imrama and Navigatio Sancti Brendani). The implications of the hero returning and reporting his adventures will be discussed, with reference to the wider context of the reporting of information in medieval Irish literature. In particular, the possible religious significance of the motif in relation to a reading of the texts as Christian allegories will be considered. Brief comment will also be made on how the motif is interpreted in the versions of the Brendan legend found in other medieval European vernaculars, and how this may illuminate the distinctive characteristics of the Irish material.

This paper will address various textual questions in quatrains 2-11 (lines 172-216 of Fingal Rónáin, and will deal mainly with the interpretation of ingen Echach‘s reply in quatrain 5 (lines 184-7).

We know there's been a big jump in demand for our online services. The good news is the government are providing funding for an additional 5,000 eBooks and eAudiobooks to make it easier for you to find something you'll love! #TakeACloserLook #StayHomeStaySafe Retweeted by DIAS_SCS Library

Spring Newsletter just launched! See what has happened in 2020 so far: mailchi.mp/5ea85f227dce/d… Subscribe to our mailing list today to get future editions direct to your mailbox: dias.ie/mailinglistsub… #DIASdiscovers Retweeted by DIAS_SCS Library

Enjoy this time of shelf isolation dear Annals. Glad @DIAS_ISOS took a few snaps of you before the lockdown. twitter.com/Library_RIA/st…

The Annals of the Four Masters is still NOT on display in our Reading Room as it's in self isolation. But you can view it online in your own Reading Room via Irish Script On Screen https://t.co/T1qWGMPNW4 along with lots of other #manuscripts https://t.co/K4sMxPKBy8

Unfortunately this year's Paul Walsh Memorial Lecture, due to be given next month by Prof. Barry Lewis @DIAS_Dublin @SCSLibrary, has had to be postponed. Tentatively rescheduled for *1st Oct.*, subject to public health situation. @EarlyIrishMU @MaynoothUni maynoothuniversity.ie/early-irish-se… Retweeted by DIAS_SCS Library 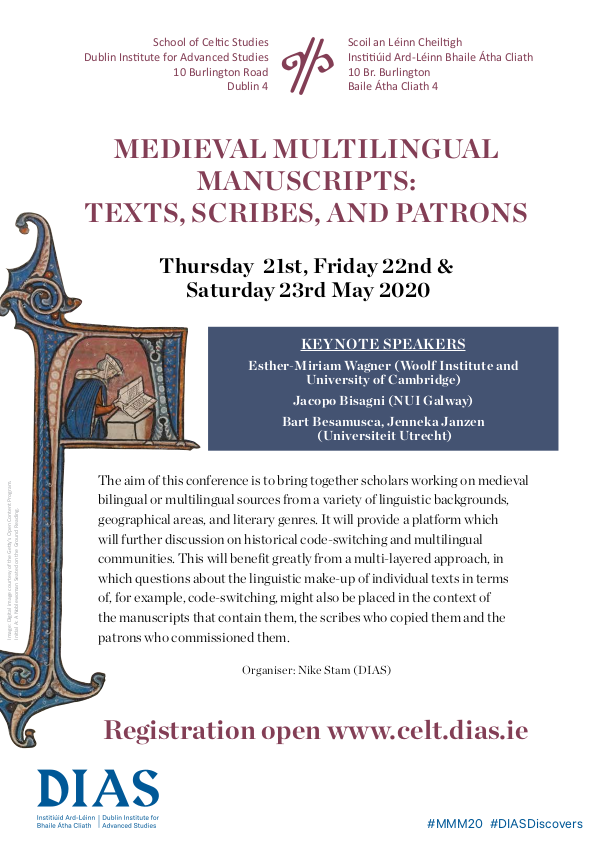 Discover the medieval masterpiece, The Book of Kells 📖 in our free online course starting next week. Sign up today! futurelearn.com/courses/book-o… @BookOfKellsTCD @tcddublin Retweeted by DIAS_SCS Library

You can search all open access content on JSTOR without a login - there's more than 6,000 ebooks and over 150 journals: jstor.org/open/ Retweeted by DIAS_SCS Library

Also - what a great time to check out all our online projects #DIASdiscovers All available on the side bar here library.celt.dias.ie

Wherever possible - we are happy to check any references for you while we are closed. Our catalogue is available here library.celt.dias.ie Or contact details are available here dias.ie/celt/celt-libr… 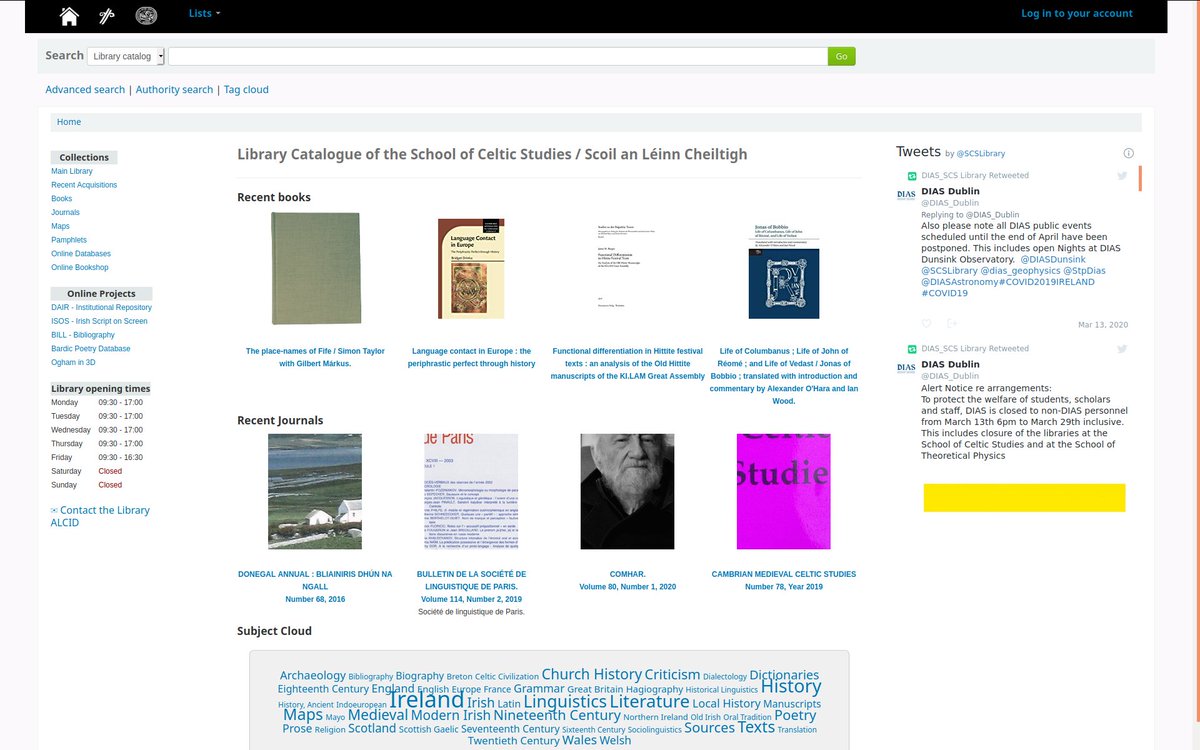 Alert Notice re arrangements: To protect the welfare of students, scholars and staff, DIAS is closed to non-DIAS personnel from March 13th 6pm to March 29th inclusive. This includes closure of the libraries at the School of Celtic Studies and at the School of Theoretical Physics Retweeted by DIAS_SCS Library

On St Patrick's Day, and to help us communicate digitally in the age of contagion, BAIS will be running an Irish Studies Digital Research Day on Twitter. All we ask is for you to tweet about your research using the hashtag #IrishStudies2020, making sure to copy this account in. Retweeted by DIAS_SCS Library