His Excellency Mr Tibor Tóth, Executive Secretary of the Preparatory Commission for the Comprehensive Nuclear-Test-Ban Treaty Organization (CTBTO) recently visited DIAS and gave the 2012 Statutory Public Lecture of the School of Cosmic Physics. The lecture was held in Trinity College on Monday 17th September and was entitled “Global Science for the Benefit of Security and Humankind“.

Pictured below from left to right: 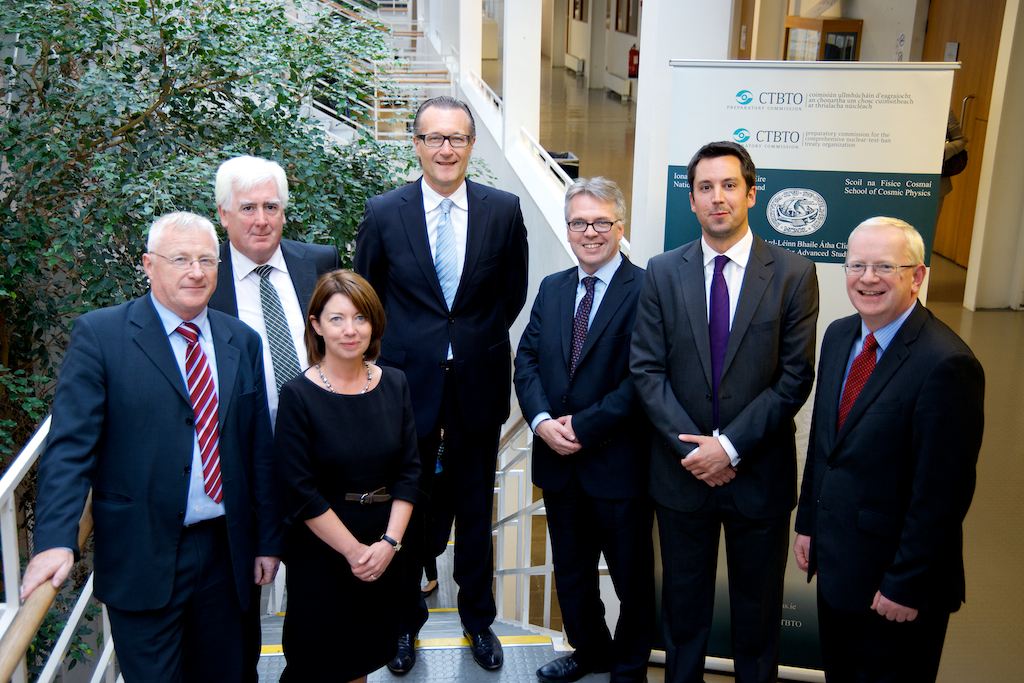 “Global Science for the Benefit of Security and Humankind”

The signature of the Comprehensive Nuclear-Test-Ban Treaty in 1996 was a culmination of decades of discussions among States to curb nuclear testing as well as the increase and further development of nuclear weapons. The Treaty established a unique and innovative global verification regime based on state-of-the art technologies to pick up signals of possible nuclear explosions. The monitoring system is built by States for States sharing information around the clock from the monitoring stations positioned in all corners of the earth. The joint investment reflecting a true common achievement has revealed its additional value in benefitting people in their daily lives through the civil and scientific applications of the verification technologies. The talk will be illustrated with an analysis of the political significance of the Treaty, the build-up of the verification regime and its contribution to tsunami-warning and tracing of radionuclides. This was exemplified during early warning of the tsunami generated by the 2011 Great East Japan Earthquake and the disaster management of the ensuing Fukushima nuclear power plant accident.

Since 2005, Ambassador Tibor Tóth is the executive head of the Preparatory Commission for the Comprehensive Nuclear-Test-Ban Treaty Organization (CTBTO), an intergovernmental organization of 183 Member States. Tóth has 16 years of experience in nuclear test ban matters. As CTBTO Executive Secretary, he manages a staff of 300 and an annual budget of USD 120 million. CTBTO operates a global system of some 500 monitoring and communication facilities, representing a 1 billion dollar investment. The CTBTO was instrumental in detecting the 2006 and 2009 nuclear weapon tests by the DPRK and contributed to the early warning of the tsunami generated by the 2011 Great East Japan Earthquake and to the disaster management of the ensuing Fukushima nuclear accident.

Ambassador Tóth has an aggregated 40 years of leadership experience in nuclear, biological, chemical and conventional arms control, non-proliferation and disarmament. Tóth served as Ambassador and Permanent Representative to the United Nations Office in Geneva (1990–1993 and 2003–2005), Vienna (1997–2001) and The Hague (1993). He represented Hungary at the Conference on Disarmament (CD), the Preparatory Commission of the Organization for the Prohibition of Chemical Weapons (OPCW), the International Atomic Energy Agency (IAEA) and the CTBTO. Since 1986, Tóth has participated in all sessions of the UN General Assembly and its First Committee in New York. Tóth served as Deputy State Secretary of Defense responsible for international affairs (1994–1996).

Ambassador Tóth has accumulated some 15 years of experience in biological weapons prohibition and another 15 years in chemical weapons disarmament. As Chair, Tóth led all the negotiations on an implementation regime for the Biological Weapon Convention (1991–2003). Tóth launched the on-going intersessional process on the implementation of the BWC and put in place its support secretariat. He negotiated the provisions on the Executive Council of the Chemical Weapons Convention and triggered in 1996 the entry into force of the CWC through Hungary’s decisive ratification.

For half a decade (1986-1990) he was also in charge of Hungary’s conventional force reduction and confidence building measures policy, personally contributing to the concept of national limits reflected in the CFE Treaty. As Deputy State Secretary he put in place enhanced confidence and security building measures with Romania and Slovakia. Tóth initiated in 1989 the joint organization by Canada and Hungary of the Open Skies Conference, leading later to the Open Skies Treaty and the two countries becoming its depositaries. Tóth set in motion Hungary’s voluntary renunciation of anti-personnel landmines in 1997, the second unilateral ban legislation worldwide prior to the Ottawa Convention.

Organised as part of Dublin City of Science 2012