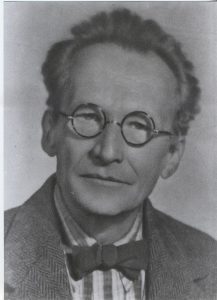 Today (05.02.18) marks the 75th anniversary of a lecture in Dublin regarded as one of the most important scientific lectures of all time.

Commenting today, Dr. Eucharia Meehan, CEO and Registrar of DIAS, said: “We are immensely proud to have had Professor Erwin Schrödinger as the first Director of DIAS’s School of Theoretical Physics.

“DIAS is home to a rich treasure trove of historical artefacts from Schrödinger’s time in Dublin. Along with lots of fascinating photographs of Schrödinger with Éamon de Valera, we have a letter to Schrödinger from Francis Crick crediting ‘What is Life?’ as an influence in his and James Watson’s discovery of DNA.”

“Schrödinger’s ‘What is Life?’ lecture series not only brought a broad range of theoretical physics concepts to the non-expert but have also been widely credited with inspiring the discovery and decoding of DNA, our genetic building blocks.”

The lectures delivered by Schrödinger 75 years ago dealt with the physical aspects of living cells; specifically, with the bearing of quantum theory on the structure of chromosomes and the nature of mutation.  They presented an early theoretical description of the storage of genetic information and have been credited as a source of inspiration in the discovery of DNA and subsequent decoding of the human genome.

The lectures were public lectures addressed to a general audience. The requirement to give such lectures was written by de Valera into the act establishing DIAS.

The ‘What is Life?’ lectures were subsequently published in a book of the same name and translated into German, French, Swedish, Japanese, Italian and Russian.

At the time, the lectures were covered by international outlets such as Time Magazine, as well as Ireland’s national media.

To mark today’s anniversary, DIAS have released a series of photos and newspaper clippings from Erwin Schrödinger’s time at DIAS from their archive.  These are available by emailing eva@alicepr.com.

DIAS was founded by Éamon de Valera in 1940 as a centre of excellence for advanced scholarship focused on three disciplines: Celtic Studies, Theoretical Physics and Cosmic Physics.  As a globally embedded institution which attracts scholars and academics from around the world, it conducts and publishes advanced research. The organisation also leads Ireland’s participation in a number of international research endeavours, runs the Dunsink Observatory and coordinates a range of national initiatives on behalf of government.  Further information is available at www.dias.ie.