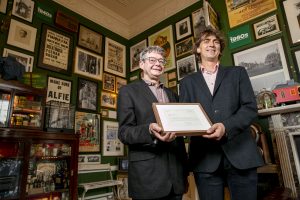 The grandsons of two men who played a key role in Irish public life during the 20th Century met for the first time today (13.06.18) at an event in Dublin commemorating the life’s work of Nobel prize-winner and Dublin resident, Professor Erwin Schrödinger.

As an outspoken and high-profile critic of the Nazi regime, Professor Schrödinger was forced to flee his native Austria on the eve of World War II, and was brought to Ireland by Éamon de Valera.

De Valera, who was Taoiseach at the time, was in the process of establishing Ireland’s first high-level research institute – the Dublin Institute for Advanced Studies (DIAS) – and approached Schrödinger to be the first Director of its School of Theoretical Physics.  Schrödinger remained in that post until his retirement in 1956, when he returned to Austria.

Today (13.06.18), Schrödinger’s grandson, Professor Terry Rudolph, met with Ruairí Ó Cuív, grandson of Éamon de Valera at a special event organised by DIAS in the Little Museum of Dublin.  The event took place as part of a year-long programme of DIAS events marking the 75th anniversary of Schrödinger’s famous ‘What is Life?’ lecture series. 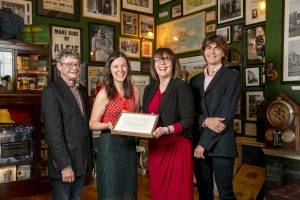 Letter linking ‘What is Life?’ lectures to discovery of DNA

In 1943, Schrödinger delivered a series of public lectures, known as the ‘What is Life?’ lectures, which were subsequently cited by scientists James Watson, Francis Crick and Maurice Wilkins as inspiration on their path to the discovery of DNA.

To mark the 75th anniversary of the lecture series, DIAS is partnering with the Little Museum of Dublin to publicly exhibit a letter written by Francis Crick to Erwin Schrödinger.  In the letter, Crick credits Schrödinger’s ‘What is Life?’ as an influence in the discovery of DNA.

Speaking at today’s event, Prof. Rudolph, who is a physicist at Imperial College London, said: “I am delighted to be in Dublin this week as part of the programme of events commemorating the ‘What is Life?’ lecture series.  Having this letter on display means the public can better understand and engage with some of the major scientific achievements in which Ireland has played a significant role, often facilitated by the special and unique institution, DIAS.”

Dr. Eucharia Meehan, CEO and Registrar of DIAS, said: “As our first Director of Theoretical Physics, Schrödinger was a key figure in the development of DIAS.  So it is important for us to commemorate the 75th anniversary of his seminal lectures, and his contribution to the discovery of DNA.  Throughout 2018 we have a number of events planned to mark this point in Ireland’s scientific history.

“We are delighted to have Professor Schrödinger’s grandson here in Dublin at the opening of our programme of events and to have him meet with Ruairí Ó Cuív, whose maternal grandfather founded DIAS. Given that Ruairí’s father, Brian Ó Cuív, was also a Professor of Celtic Studies at DIAS, it makes this meeting all the more special.”

The full programme of DIAS ‘What is Life?’ commemorative events is available to view at: https://www.dias.ie/2018/05/23/celebrating-the-75th-anniversary-of-schrodingers-what-is-life-lectures/