On 9th September 2016 the Irish National Seismic Network (INSN) recorded an unusual seismic event located in the Democratic People’s Republic of Korea (DPRK). The recordings are consistent with the announcement by the DPRK that it has conducted a nuclear test, their fifth since 2006.

Initial estimates for the size of this event indicate it to be equivalent to an earthquake of magnitude 5.3.

The seismogram below shows a sample of signals recorded for this event arriving at our seismic stations in Wexford (IWEX), Galway (IGLA) and Louth (ILTH) . 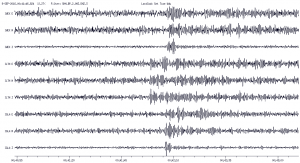 The official announcement from CTBTO