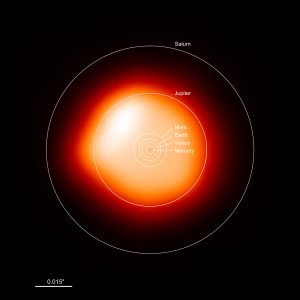 An international team of astronomers have used ALMA (Atacama Large Millimeter/submillimeter Array), the world’s largest radio telescope, to make the most detailed image of the surface of a star (other than our Sun) that has ever been created at radio wavelengths. The image was taken of Betelgeuse, the famous Red Supergiant located in the constellation Orion, and remarkably reveals that the temperature in its inner atmosphere is far from uniform. The discovery could help explain how the atmospheres of these stars are heated and how material from these stars is transported to the interstellar medium.

“ALMA now provides us with the capabilities to image surface features on nearby stars while also directly measuring the temperature of these features” explains Dr. Eamon O’Gorman, an Irish Research Council Fellow and Astronomer at the Dublin Institute for Advanced Studies, who led the team. “We have known for decades that the visible surface of Betelgeuse is not uniform, but ALMA has now shown in beautiful detail that the temperature in its inner atmosphere is also not uniform. It looks like these temperature fluctuations could be caused by magnetic fields, similar to what we see on the Sun, our nearest star.” The team’s results have recently been published in the journal ‘Astronomy & Astrophysics’. 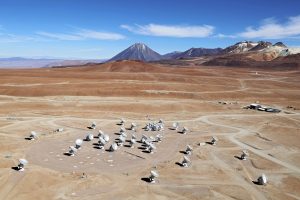 In terms of size, Betelgeuse is enormous, being about 1400 times larger than our Sun, and more than one billion times larger in terms of volume. As stars like Betelgeuse evolve, they expel an enormous amount of themselves back into the interstellar medium via stellar winds.  These winds contain crucial heavy elements that the stars have manufactured and are vital ingredients for the next generation of stars and planets.

“Located about 650 light years away, Betelgeuse is certainly not the closest star to our solar system, but its sheer size makes it an ideal target to image directly with ALMA”, says Dr. Pierre Kervella, astronomer at the Paris Observatory and member of the team, he continued, “When we look at the night sky with our naked eyes, we see bright stars everywhere, but because they are so small, even the most powerful telescopes in the world struggle to image their surfaces. Our results show ALMA has the capability to image the surfaces of the largest stars in detail.”

Consisting of 66 gigantic 12-metre and 7-metre antennas, ALMA is the most powerful radio telescope in the word. The telescopes can separate over distances of 16 kilometres, giving ALMA an extraordinarily powerful “zoom”. ALMA is an international astronomy facility located at 5000 metres altitude at Chajnantor in northern Chile, at one of the driest sites in the world. ALMA is a partnership of Europe, North America and East Asia in cooperation with the Republic of Chile and is the world’s largest astronomy project.

ALMA on the Chajnantor Plateau, located at an altitude of 5000 meters in the Chilean Andes. ALMA consists of 66 individual antennas  which combine their signals together and can be separated by distances of up 16 kilometres.