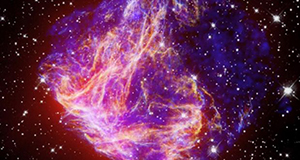 A paper in the journal Science on 23 January 2015, carries news of three very high-energy objects that have just been discovered in our neighbouring galaxy, the Large Magellanic Cloud.

The trio includes a ‘super bubble’ and the new findings could help explain the mystery of where cosmic gamma rays come from.

The international team of scientists includes two from the Dublin Institute for Advanced Studies: Professor Luke Drury, and Prof Felix Aharonian, who is a professor at DIAS and also head of the high energy astrophysics theory group at the Max Planck Institute of Nuclear Physics in Heidelberg.

The team has been observing the skies using the High Energy Stereoscopic System, H.E.S.S.  In the Large Magellanic Cloud they discovered three very high-energy gamma-ray sources of three different types: the most powerful pulsar wind nebula ever seen, a powerful supernova remnant, that is one of the brightest yet seen, and a so-called ‘super bubble’ —  a shell measuring 270 light years across, blown by multiple stars and supernovae. This is the first time that such star-like gamma-ray sources have been detected in an external galaxy, at these gamma-ray energies. The super bubble represents a new source class in very high-energy gamma rays.

Very high-energy gamma rays are the best tracers of cosmic accelerators such as supernova remnants and pulsar wind nebulae – the end-products of massive stars. There, charged particles are accelerated to extreme velocities. When these particles encounter light or gas in and around the cosmic accelerators, they emit gamma rays. Very high-energy gamma rays can be measured on Earth by observing the Cherenkov light emitted from the particle showers produced by incident gamma rays high up in the atmosphere using large telescopes with fast cameras.

The Large Magellanic Cloud (LMC) is a dwarf satellite galaxy of our own Milky Way galaxy, located about 170,000 light years away. New, massive stars are formed there at a high rate, and it also has many massive stellar clusters. The LMC’s supernova rate relative to its stellar mass is five times that of our Galaxy. The youngest supernova remnant in the local group of galaxies, SN 1987A, is in the LMC. Therefore, the H.E.S.S. scientists dedicated significant time and resources to searching for very high-energy gamma rays from this cosmic object.

For a total of 210 hours, the H.E.S.S. observed the largest star-forming region within the LMC called the Tarantula Nebula. For the first time in a galaxy outside the Milky Way, individual sources of very high-energy gamma rays could be resolved: three extremely energetic objects of different types.

First, the so-called ‘super bubble’, 30 Dor C. This is the largest known X-ray-emitting shell. It appears to have been created by several supernovae and strong stellar winds. Super bubbles are broadly discussed as (complementary or alternative to individual supernova remnants) factories where galactic cosmic rays are produced. The H.E.S.S. results demonstrate that this bubble is a source of, and filled by, highly energetic particles. The super bubble represents a new class of sources in the very high-energy regime.Second, the powerful pulsar wind nebula. Pulsars are highly magnetized, fast spinning neutron stars that emit a wind of ultra-relativistic particles forming a nebula. The most famous one is the Crab Nebula, one of the brightest sources in the high-energy gamma-ray sky. The new pulsar, PSR J0537−6910, driving the wind nebula N 157B discovered by the H.E.S.S. telescopes in the LMC is in many respects a twin of the very powerful Crab pulsar in our own Galaxy. However, its pulsar wind nebula N 157B outshines the Crab Nebula by an order of magnitude, in very high-energy gamma rays. Reasons are the lower magnetic field in N 157B and the intense starlight from neighbouring star-forming regions, which both promote the generation of high-energy gamma rays.

The new discoveries were challenging, as the three sources were observed at the limits of detectability, and are partially overlapping with each other, proving a challenge to the H.E.S.S. scientists. The discoveries were only possible due to the development of advanced methods of interpreting the Cherenkov images captured by the telescopes, improving in particular the precision with which gamma-ray directions can be determined.

Professor Luke Drury, head of the School of Cosmic Physics at DIAS, said that  “this research reveals that our satellite galaxy, the large Magellanic cloud, is host to at least three types of extremely powerful high-energy gamma-ray sources including the first detection of a super-bubble.  This confirms long-standing theoretical speculations and is a significant advance in understanding the hundred-year-old mystery of the origin of cosmic rays”.

Prof Felix Aharonian, professor at the Dublin Institute for Advanced Studies and head of the High Energy Astrophysics Theory group at the Max Planck Institute of Nuclear Physics in Heidelberg said: “These results are very exciting, but the biggest surprise, of course, is the detection of the super bubble, 30 Dor C in gamma-rays. It is difficult to over-estimate the significance of this discovery for the origin of Galactic Cosmic Rays. It is possible that supper bubbles  represent a  complementary or perhaps even an alternative (to supernova remnants)  source population  responsible for the major fraction of cosmic rays produced in our Galaxy.”

The consortium should soon be able to make even more discoveries: the new H.E.S.S. II 28 m telescope will boost performance of the H.E.S.S. telescope system, and the planned Cherenkov Telescope Array (CTA) will provide even deeper and higher-resolution gamma-ray images of the LMC. In the plans for science with CTA, the satellite galaxy is already identified as a ’key science project’ deserving special attention. 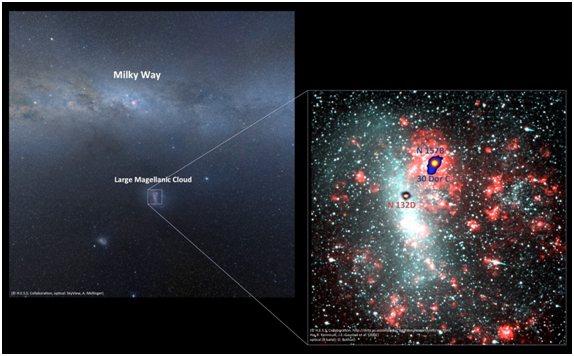 The instrument: The results were obtained using the High Energy Stereoscopic System (H.E.S.S.) telescopes in Namibia, in South-West Africa. This system of four 13 m diameter telescopes “ recently complemented with the huge 28 m H.E.S.S. II telescope “ is one of the most sensitive detectors of very high-energy gamma rays. These are absorbed in the atmosphere, where they create a short-lived shower of particles. The H.E.S.S. telescopes detect the faint, short flashes of bluish light which these particles emit (named Cherenkov light, lasting a few billionths of a second), collecting the light with big mirrors which reflect onto extremely sensitive cameras. Each image gives the position on the sky of a single gamma-ray photon, and the amount of light collected gives the energy of the initial gamma ray. Building up the images photon by photon allows H.E.S.S. to create maps of astronomical objects as they appear in gamma rays.

The H.E.S.S. telescopes have been operating since late 2002. In September 2012 H.E.S.S. celebrated the first decade of operation, by which time the telescopes had recorded 9415 hours of observations, and detected 6361 million air shower events. H.E.S.S. has discovered the majority of the about 150 known cosmic objects emitting very high-energy gamma rays. In 2006, the H.E.S.S. team was awarded the Descartes Prize of the European Commission, in 2010 the Rossi Prize of the American Astronomical Society. A study performed in 2009 listed H.E.S.S. among the top 10 observatories worldwide.