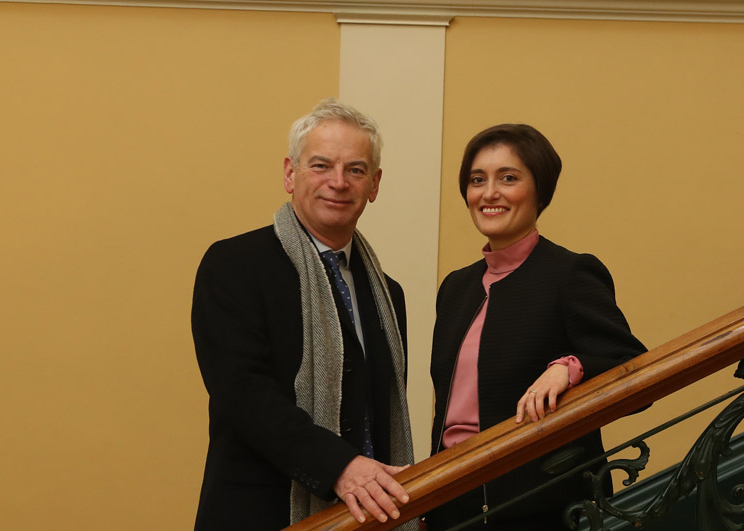 A Dublin-based researcher is amongst a team of astronomers who have made a significant discovery on how new planets are formed.

Rebeca García López, a researcher at the School of Cosmic Physics at the Dublin Institute for Advanced Studies (DIAS), led a team for the EU ‘DIGDEEP’ project, which recently discovered that the discs that surround newborn stars emit winds that may help the formation of planets and keep them from spiralling into their parent star.

Explaining the significance of the ‘DIGDEEP’ discovery today (07.11.19), Dr. García López said: “Roughly one new star forms each year in our galaxy, the Milky Way, and planet formation follows. As astronomers, we knew that, when stars are formed, there is a build-up of matter that is expelled through winds and jets. But, up until now, we didn’t know whether this matter was largely expelled from the newborn star or from the discs that surround all newborn stars, known as protoplanetary discs.

“Our ‘DIGDEEP’ project team used a sophisticated telescope – the interferometer GRAVITY – and computer modelling to discover that newborn stars expel matter through disc winds. This is, potentially, key to planets remaining in the zone where habitation is possible.”

The “Goldilocks Zone”
For her work on ‘DIGDEEP’, Dr. García López studied discs within five astronomical units from their star (an astronomical unit is the distance between the Earth and the Sun and equals 150 million kilometres) . This region is dubbed by astronomers the “Habitable Zone” or the “Goldilocks Zone” because its distance from the sun makes it an ideal environment for life (not too hot and not too cold).

Studying a sample of newborn stars allowed Dr. García López and her team to gain insight into the conditions in the terrestrial planet-forming zone in a protoplanetary disc. They then used those conditions in computer simulations to replicate how planet formation takes place, gaining clues into how previous planets ended up in the “Habitable Zone”.

Dr. García López’s research was supervised by Professor Tom Ray, of DIAS’s School of Cosmic Physics. Commenting today, he said: “The results from ‘DIGDEEP’ clearly show that the matter expelled when stars are formed comes from the inner region of the protoplanetary disc. Such disc winds alter conditions in the disc. Without disc winds, Jupiter may have ended up closer to the Sun than Mercury or even spiralled into it. The Solar System in its early years was a highly dynamical environment.

“What we want to know now is exactly how disc winds affect planet formation. Winds and jets may be a vital ingredient in determining not only how planets like the Earth form but also in determining their final resting place.”

DIAS will continue this exciting work in the future using facilities at the European Southern Observatory and also with the James Webb Space Telescope due for launch in March 2021.