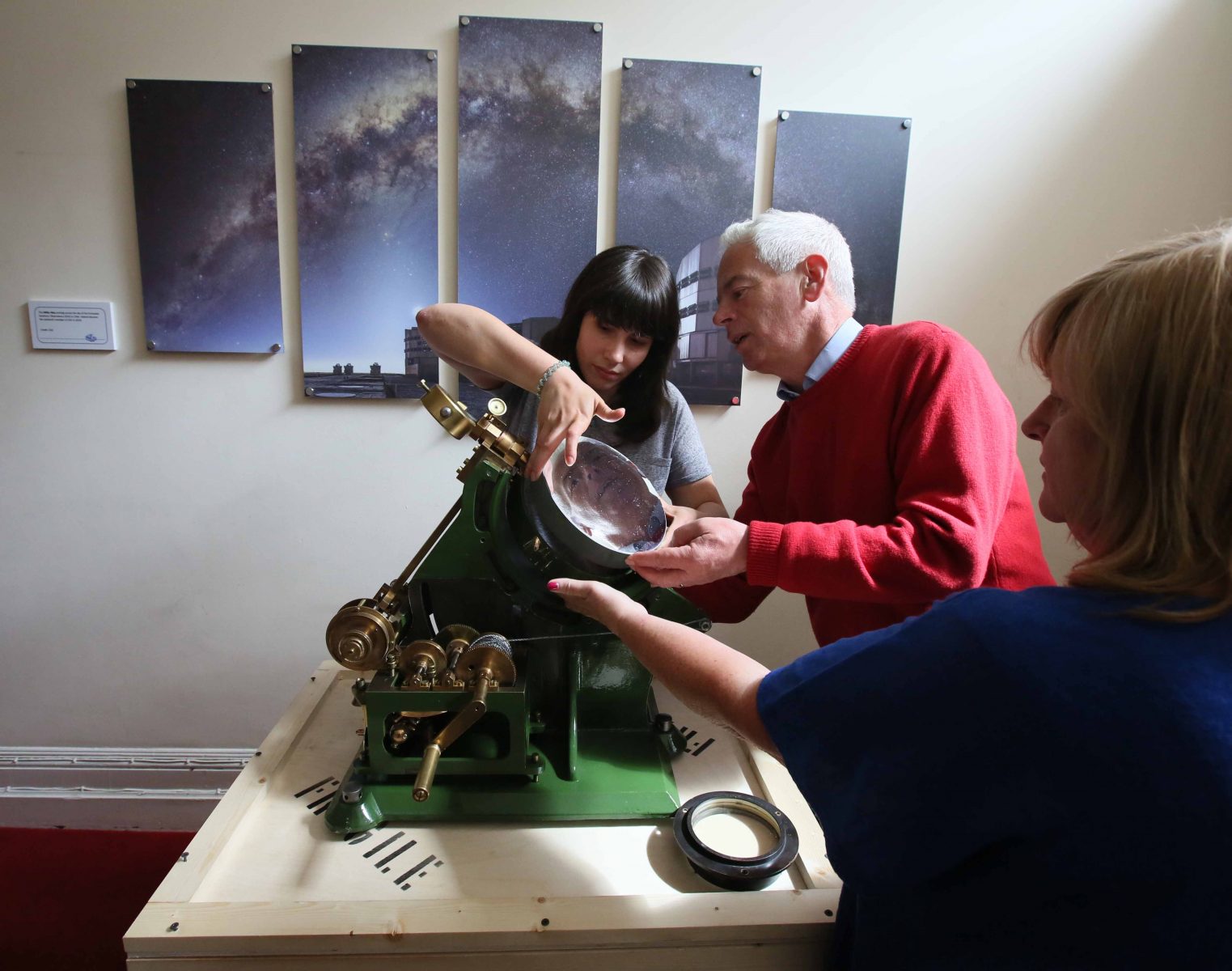 Astronomical equipment used to test Einstein’s Theory of Gravity has been shipped from the Dublin Institute for Advanced Studies (DIAS) to Sobral in Brazil to commemorate the 100th anniversary today (29.05.19) of the observations that confirmed the predictions of Albert Einstein.

The Grubb Coelostat and Einstein Lens are usually housed at the DIAS Dunsink Observatory, but will remain on loan to the Sobral Museum in Brazil until August, when they will feature in an exhibition in Dublin to mark 100 years of astronomical development.

The Grubb Coelostat reflects light from the sky onto a fixed telescope, and the Einstein Lens is used to focus the light onto a photographic plate.  Both were manufactured by Howard Grubb – one of the most famous telescope-makers in the world in the early 20th Century – at his optical works in Observatory Lane, Rathmines, Dublin.

The equipment was used during a solar eclipse on 29th May 1919 to test Einstein’s Theory of General Relativity – in an experiment coordinated by astronomer and physicist Arthur Stanley Eddington and led, in Sobral, by Andrew Crommelin, a native of Co. Antrim.

Four years before, in 1915, Albert Einstein had predicted that, when a solar eclipse occurs, starlight would be deflected by a small amount, with the amount of deflection increasing closer to the Sun. The specialist equipment, manufactured in Ireland, was able to measure this very small effect, and is now returning to Sobral for the first time in 100 years.

Professor Tom Ray of DIAS is in Sobral today to mark the centenary of Eddington’s and Crommelin’s experiment.  Commenting today, he said: “The effects observed by Crommelin in Brazil 100 years ago – using this Irish equipment – were key to Eddington proving Einstein’s General Theory of Relativity.  When the results were announced later the same year, they made front-page news across the globe.

“It is fantastic to be here in Brazil to mark this centenary and highlight the significant role Ireland played in proving Einstein right.  On the morning of the eclipse, the other equipment did not work properly but the Grubb Coelostat and lens saved the day.  Eddington himself said that the strongest evidence for Einstein being right came from the lens and coelostat from Ireland.

“There has been huge public and media interest here in Brazil in the fact that the equipment is travelling all the way from Dublin back to Sobral after 100 years.  This is a timely reminder of Ireland’s legacy and ongoing leadership in the fields of theoretical physics, astronomy and astrophysics.”

Also commenting today, Professor Denjoe O’Connor, Senior Professor of Theoretical Physics, DIAS, said: “ The measurements from the 1919 eclipse established that the old Newtonian theory of gravity was inconsistent with the new observations while Einstein’s theory of general relativity explained the measurements. This forced physicists to replace the old Newtonian theory with  Einstein’s theory of gravity where the metric of spacetime is a dynamical variable.

“With the advent of quantum theory ten years later the challenge became and remains to make these two theories of nature into a consistent larger theory encompassing both, i.e. into a theory of quantum gravity. We at DIAS are actively engaged in this endeavour.”