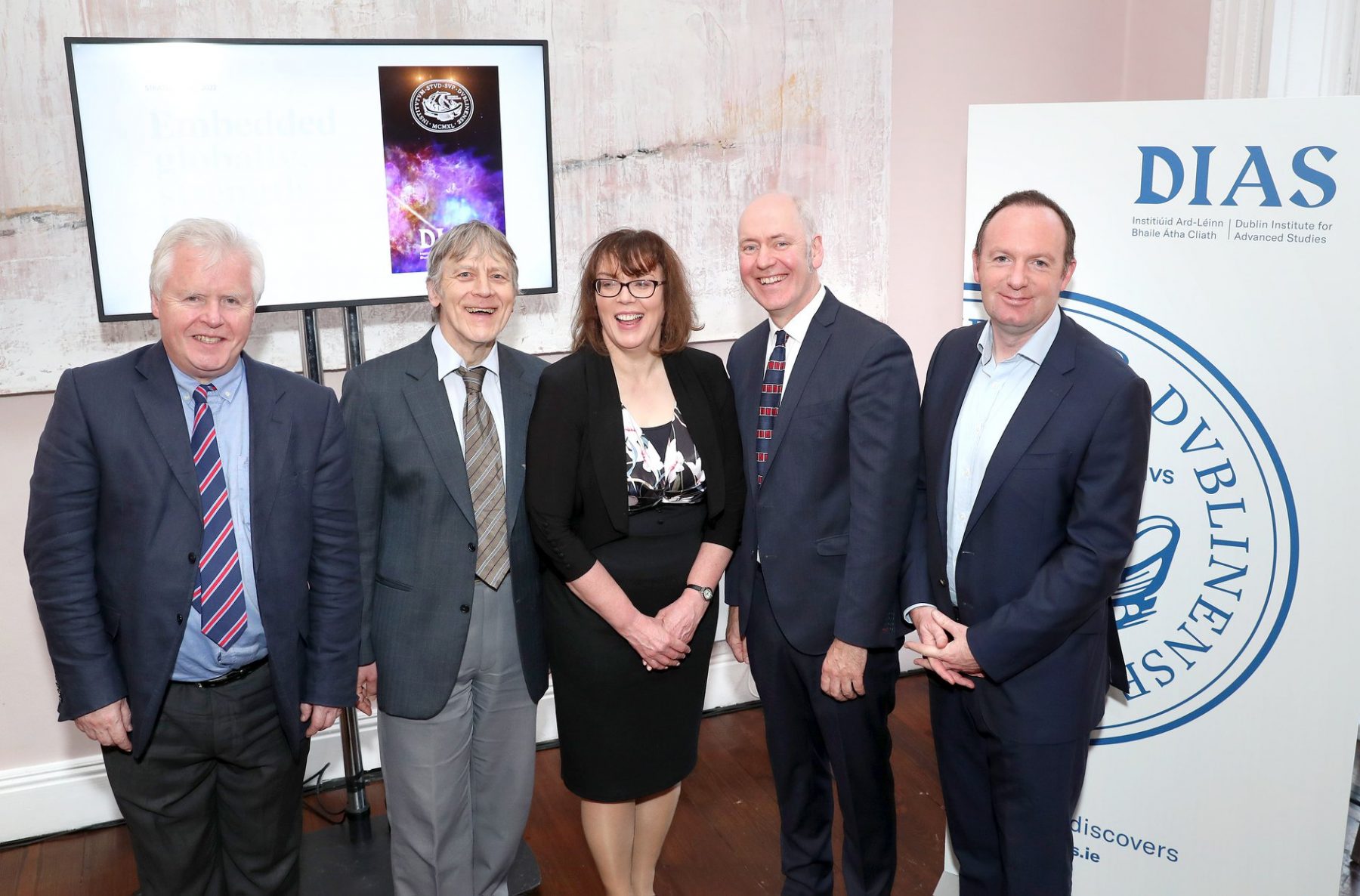 The Dublin Institute for Advanced Studies (DIAS) has released details of some of its most significant achievements over the decade from 2010 to 2019.

DIAS’s work focuses on Astrophysics, Geophysics, Theoretical Physics and Celtic Studies. Over the past 10 years, the Institute has led Ireland’s participation in some of the most prestigious international projects in those research areas.

Commenting today, Dr. Eucharia Meehan, CEO and Registrar of DIAS, said: “The past 10 years were very successful for DIAS – and for Ireland’s scientific community overall. We attracted leading global talent to work here; we ensured Ireland was centrally involved in ground-breaking international projects; and we furthered human understanding of subjects such as the origin of cosmic rays, the forecasting of volcanic eruptions, and the foundations of quantum field theory.

“We were recognised for our work with a range of prestigious awards and grants. In 2012, for example, Professor Fergus Kelly of Celtic Studies was awarded the Derek Allen Prize by the British Academy. The following year, Professor Werner Nahm was awarded the Max Planck Medal, which recognises extraordinary achievements in theoretical physics. DIAS and Ireland are well placed to build on the past decade of internationally acclaimed scientific achievements and to contribute proactively to important global discoveries throughout the 2020s and beyond.”

The 2010 to 2019 achievements highlighted by DIAS include the following:

Astrophysics
• Satellite development: Over the decade, DIAS continued to deepen its space technology expertise. In 2012, the Mid-Infrared Instrument, which DIAS helped to build for the James Webb Space Telescope (JWST), was completed and sent to NASA. DIAS is currently producing software for the JWST, the largest telescope that will have ever been put in space. More recently, in 2018, the Atmospheric Remote-sensing Infrared Exoplanet Large-survey (ARIEL) satellite was selected as part of the European Space Agency’s programme. DIAS helped design ARIEL, and will play a lead role in developing the optics and software for its detectors. The mission will study the atmospheres of planets around distant stars.
• Understanding our sun: DIAS astrophysicists discovered where particles are accelerated by solar storms as they are launched by the Sun using data from the LOFAR radio telescope. DIAS astrophysicists not only were centrally involved in building the first research-grade telescope in Ireland in over a century (I-LOFAR in Birr), but also were pioneers in the use of large radio telescopes to study solar eruptions and their impact on Earth.
• Star formation: In 2017, a team led by DIAS showed for the first time that massive stars gain mass in bursts, mimicking what occurs in low-mass stars like the Sun and even failed stars known as brown dwarfs.
• The origin of cosmic rays, which are a difficulty for space travel, was further clarified in 2019, when DIAS astrophysicists revealed that the clusters of young massive stars – and possibly also the Supermassive Black Hole at the heart of the Milky Way – operate as extreme particle accelerators contributing to the flux of galactic cosmic rays.

Geophysics
• A worldwide reference model: In 2013, the publication of a global tomographic model established DIAS as a leader in seismic tomography of the Earth’s crust and upper mantle. The paper, now a citation classic, won its PhD student lead author a Student Author Award. Since then, the model has been used as a reference by Earth scientists all around the world.
• Understanding volcanoes: During 2016 and 2017, ground-breaking new insights into the working of volcanoes were published by DIAS geophysicists. Their work demonstrated that the upper two kilometres of the Earth’s crust is substantially weaker than previously thought, which has fundamental knock-on effects on eruption initiation and the nature of precursory seismicity. These findings could lead to improved eruption forecasting.
• A new underground ‘corridor’: In 2019, through DIAS seismic tomography, a corridor beneath Greenland was discovered, where the tectonic plate is unusually thin. Probably created by the hot Iceland Plume as Greenland drifted across it, the corridor then guided the deep flow of hot mantle material through it. This solves the long-standing mystery of how a single source of hot rock (the Iceland Hotspot) could cause simultaneous volcanic eruptions on Greenland’s eastern and western coasts.
• Exploring the deep: DIAS has developed key seismology and exploratory infrastructure for Ireland – on land and in the sea. The Irish National Seismic Network gives DIAS the capacity to monitor, detect and locate earthquakes and other seismic events anywhere in Ireland. In 2018, DIAS became the centre of marine seismology infrastructure and research, pioneering the deployment of a broadband ocean-bottom network across a vast area in the North Atlantic, including the development of a permanent ocean-bottom station offshore Ireland.

Theoretical Physics
• In 2011, DIAS Professor Werner Nahm was elected a Fellow of The Royal Society and, in 2013, he was awarded the Max Planck Medal for his work on quantum field theory. The Medal is the highest award of the German Physical Society, the world’s largest organisation of physicists, and is awarded for extraordinary achievements in theoretical physics.
• Origin of space and time: Mathematical possibilities were investigated by DIAS physicists over the past 10 years, taking into account that there is no sign of the existence of either space or time before the Big Bang. An origin within a more general structure might be reflected in a subtle ‘fuzziness of spacetime’ at small scales, and DIAS focused on the development and investigation of matrix models for the study of fuzzy spaces, resulting in novel insights.
• Quantum computing: Working with quantum information will transform our technology in the future, with the double challenge of efficient transmission and quantum computation. New statistical concepts for the description of quantum information and new results on its transmission through noisy channels were obtained by DIAS physicists over the last decade, challenging previously-held ideas.
• Unification of quantum theory and gravity – ‘the holy grail of physics’: The mathematical description of string theory/M-theory, has led to the conjecture of a dual relationship between gauge theory and gravity. Strong support for this gauge/gravity duality was found by DIAS physicists, who also found that supergravity can be understood as a square of Yang–Mills theories, in a way related to the Freudenthal–Rosenfeld–Tits magic square discovered in mathematics.

Celtic Studies
• In 2012, Fergus Kelly, Senior Professor at the DIAS School of Celtic Studies, was awarded the Derek Allen prize in Celtic Studies by the British Academy. Professor Kelly received this award for his wide-ranging publications on many aspects of mediaeval Irish language and literature, and especially early Irish (Brehon) Law, on which he is one of the foremost authorities. His ‘A Guide to Early Irish Law’ (1988) marks an exponential shift in research into Early Irish law, and his ‘Early Irish Farming’ (2000) is a major contribution to the study of the material culture of early medieval Ireland.
• Irish-Script-on-Screen (ISOS) is a national project for digitisation of manuscripts in the Irish language. It provides online exposure and access for a vital part of Ireland’s cultural heritage, whilst also contributing to the conservation of these valuable books and documents by reducing the need to handle them. By 2019, ISOS had digitised over 400 medieval manuscripts found in 21 repositories, in Ireland and abroad. ISOS is a key ongoing project of the School of Celtic Studies.
• Ogham in 3D: Research on ogham stones carried out by the School of Celtic Studies made important contributions to promoting Ireland’s rich cultural heritage over the past decade. Ogham stones constitute the earliest recorded form of Irish, dating back at least as far as the 5th Century AD. The School of Celtic Studies Ogham in 3D project has, to date, digitised approximately 150 of these stones, making them available with commentary on the website to a worldwide public and contributing to their conservation.